Potential for a green energy economy based on hydrogen 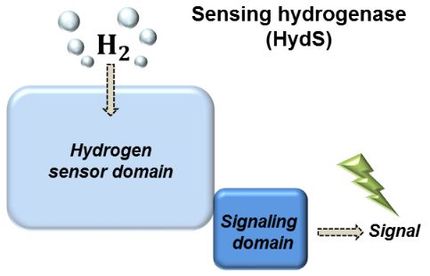 Hydrogenases are enzymes capable of making hydrogen gas (H2) using protons from water, a reaction with relevance to a potential future green energy economy based on H2.

Bacteria containing these enzymes often produce H2 as a waste product during sugar metabolism in the absence of oxygen. Meanwhile, other types of bacteria consume this H2 as an energy source. Hydrogenases, the key enzymes in both these processes, are only required under specific conditions, and so their synthesis inside the bacterium must be regulated in response to the amount of H2 present. This regulation is achieved using sensory hydrogenases capable of sensing and signaling the concentration of H2 to the bacterial protein synthesis machinery.

One particular class of sensory hydrogenases, the so-called sensory [FeFe] hydrogenases (HydS), have remained completely uncharacterized so far. Now, a team from the Max Planck Institute for Chemical Energy Conversion in Mülheim an der Ruhr in Germany together with the Institute of Low Temperature Science at the University of Hokkaido in Japan, have produced and characterized a HydS enzyme from the thermophilic bacterium Thermotoga maritima. Using the recently developed technique of artificial maturation together with advanced spectroscopic methods, the researchers showed that the protein environment of the catalytic center is elegantly tuned to optimize this protein for its sensory function.

The researchers demonstrate that the catalytic center is very sensitive to low amounts of H2 allowing the enzyme to effectively signal the presence of H2 to the regulatory system of the bacterium. This research provides a key step forward for our understanding of how these sensory enzymes work. Furthermore, knowing which adaptations tailor the sensory enzymes for their function tells us about how the other [FeFe] hydrogenases that produce hydrogen work.

Ultimately, a complete picture of the enzyme mechanism may provide important clues for telling chemists how to build better catalysts for water electrolyzers and hydrogen fuel cells, allowing the dream of a future hydrogen energy economy to become a reality.