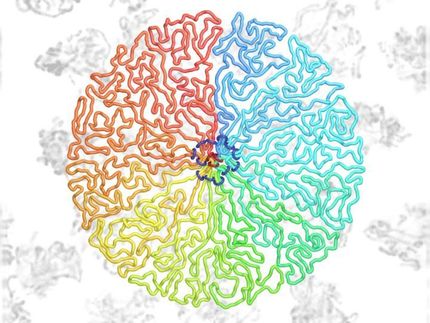 When a cells divides, strands of genetic material are folded to form a series of compacted loops, which project out from a helix-shaped axis, like steps on a spiral staircase. Smaller loops pinched within the larger coils.

Scientists have solved a longstanding puzzle of how cells are able to tightly package DNA to enable healthy cell division.

Their findings shed light on how single cells can compact DNA 10,000-fold to partition it between two identical cells - a process that is essential for growth, repair and maintenance in living beings.

Until now, the details were not clearly understood, but biochemical and imaging technologies combined with sophisticated mathematical analysis have revealed these for the first time.

They show the processes that enable copies of DNA in an existing cell to take on the necessary structure to divide correctly in two new cells.

The study clarifies one key aspect of how cells are able to constantly divide and renew, which has challenged scientists since the late 19th century.

Its findings will enable much more detailed research into the cell division process which, when it goes faulty, can lead to cancer, congenital disease and other conditions.

Researchers found that when cells divide, strands of genetic material are folded to form a series of compacted loops. These loops project out from a helix-shaped axis, like steps on a spiral staircase.

A key set of proteins known as condensin II controls the formation of these large loops of DNA and anchors them to the central spiral axis.

A related protein group, condensin I, acts to pinch smaller loops within these larger coils, enabling the genetic material to be compacted efficiently in preparation for cell division.

The combination of a helical axis, projecting loops of DNA and dense packing compacts the genome into orderly structures that can be accurately split when cells divide.

The study pinpoints the role of condensin I and condensin II, so-called molecular machines, which were previously known to have a key association with cell division.

Professor William Earnshaw, of the University of Edinburgh's Wellcome Trust Centre for Cell Biology, said: "This discovery reveals a fundamental but little-understood aspect of how cells divide - a process that efficiently packages enormous lengths of DNA into an impossibly small cell nucleus.

"Our results are an example of how, in future, intractable scientific problems may be solved by harnessing expertise across different fields - in our case combining biological and mathematical techniques."

Dr Tom Collins, from Wellcome's Genetics and Molecular Sciences team, said: "Scientists have been grappling with the question of how cells compact their chromosomes during mitosis for close to 150 years so it is brilliant to see decades of work come to fruition.

"It's the beginning of a long journey towards practical applications and the next step is to take this knowledge of how the process works in healthy cells, and identify what can go wrong to cause cancer or birth defects."

More about University of Edinburgh