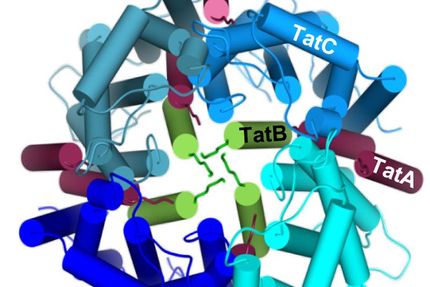 Four TatC molecules (blue) create a circle around four TatB molecules (green) to form a cavity in the center in which the protein to be transported can insert from below. Source: Journal of Biological Chemistry

Every cell is surrounded by a membrane, which ensures the internal biochemical milieu and regulates the exchange of substances with its surroundings. In every cell membrane, there are a large number of transporters that allow only one sort of molecule to pass through. In the case of very small molecules, such as water, the responsible transporters form tiny pores in the membrane, which disappear immediately after the process. But how are proteins that are thousands of times larger transported through membranes without creating a large leak? In a recent study, a team led by Prof. Dr. Matthias Müller at the Institute for Biochemistry and Molecular Biology and the special research area 746 along with Prof. Dr. Bettina Warscheid at the Institute of Biology II and the Cluster of Excellence BIOSS Centre for Biological Signalling Studies at the University of Freiburg discovered details about the structure of such a transporter for protein molecules.

In a previous study, the researchers had found that the chemical dicyclohexylcarbodiimide (DCCD) blocked the Tat transport. The scientists have now identified a specific position on TatC that can be chemically altered by DCCD, which in turn inhibits contact with the Tat substrate. The position is not located on the TatC surface, but rather in a part hidden deep within the membrane. Thus, DCCD does not inhibit the primary docking of the Tat substrate, but rather its deep penetration into the membrane along the TatC molecule. Thus, the teams were able to demonstrate that the assembly of several TatC and TatB components creates a cavity in which the Tat substrate inserts from one side of the membrane. It is only in the next step, which must still be explained, that this cavity opens to the outside for which TatA is then necessary.

The Tat transporter could serve to develop new types of antibiotics in the future: Some bacteria that are harmful to human beings use the Tat transport to export protein molecules with whose help they establish contact with human host cells. Ideally, an antibiotic should only inhibit the metabolism of bacteria and not that of patients. Since the Tat transporter does not occur in human cells, it would thus be a suitable antibiotic target.