Synthetic crosslinkers influence the elasticity of actin networks. This behavior can be attributed to different structural morphologies within the network. Fluorescence microscopy. 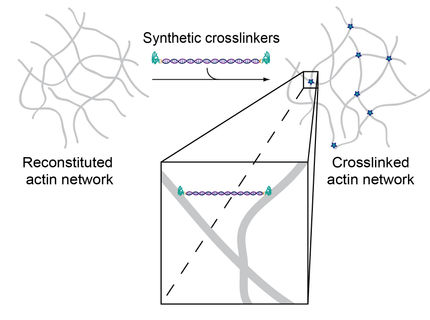 Since the two binding domains were connected by double-stranded DNA, the construct can physically crosslink actin filaments within the system.

Researchers from the Fraunhofer Institute for Cell Therapy and Immunology and Leipzig University are developing a system to enable mechanical cell properties to be precisely modulated and investigated. By drawing on synthetic mimics of proteins in cells, the links between cellular scaffold proteins (actin) can be controlled in a targeted manner and their binding properties investigated in isolation.

Cells are the smallest living entities of any organism. Aside from all kinds of biochemical processes, mechanical and biophysical properties also play an important role in their functionality. For instance, the mechanical properties of the cytoskeleton, a dynamic structural scaffold inside of cells, are decisive in determining cell stability, deformability and elasticity. The cytoskeleton is also the key engine of active cell motility and a highway for the transport of molecules within the cell. These seemingly conflicting functionalities are achieved thanks to a dynamic arrangement of actin filaments and their interaction with special proteins, so-called actin crosslinkers. These naturally occurring proteins are capable of transiently linking actin filaments and thus influencing, among other things, mechanical cell properties.

Cells boast a repertoire of various crosslinkers, which differ greatly in terms of their molecular characteristics. Both the composition and the interactions of the different crosslinker molecules with actin structures impact cell mechanics and active behaviors. The specific features of these crosslinkers and their impact on cells are, however, extremely difficult to examine independently from each other. This is why systematic studies on the precise properties of individual crosslinker molecules and their effects on the overall system have barely been viable in the past. Scientists from Fraunhofer IZI and Leipzig University have now managed to synthetically mimic naturally occurring actin crosslinkers. This purely synthetic approach allows their individual properties to be specifically modified and investigated.

These artificial crosslinkers consist of a double-stranded DNA segment attached to an actin-binding peptide at either end. By exchanging the peptides, the actin binding affinity can now be modified without simultaneously altering other parameters such as molecular length, flexibility or the number of binding domains. This means that binding properties can be precisely examined depending on only the strength and concentration of crosslinkers. The researchers were able to show that the artificially produced molecules mimic very specific mechanical properties found in their natural counterparts, but can be synthesized and systematically modified much more easily.

In studies conducted outside cells, the scientists were able to demonstrate that the synthetic crosslinkers influence both the rigidity and morphology of actin networks, depending on concentration and binding strength. In this context, the number of crosslinkers and their generation of thick actin bundles correlates with the rigidity of the network. Furthermore, the integration of DNA sections as the central core of the crosslinkers allowed the scientists to make the procedure switchable and reversible by the application of a DNA-cutting enzyme, enabling them to control the degree of crosslinking.

In further studies, the synthetic crosslinkers have already been successfully incorporated into living cells. This caused their motion to slow down significantly and furthermore reduced the invasiveness of metastatic cancer cells. These initial investigations give cause for hope that they may, someday, lead to new therapeutic concepts, e.g. ways of suppressing tumor metastasis or treating muscle disorders caused by the dysregulated crosslinking of scaffold proteins. Other possible applications lie in the area of programmable biomaterials. These findings currently form the basis of much more specific research into mechanical cell properties and their biological regulation.