How to target a gene 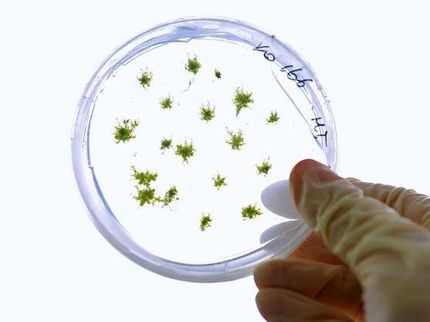 Moss plants on a Petri dish.

All living cells have invented mechanisms to protect their DNA against breaks during duplication and against damage by UV-light or chemicals. A team of biologists led by Prof. Dr. Ralf Reski from the Faculty of Biology of the University of Freiburg, Germany has now found that members of the RecQ family function in development, DNA repair and gene targeting in the moss Physcomitrella patens. Their results may hold the key to a precise engineering of plant genomes including crop plants. The Julius-Kuehn-Institute, the German Federal Research Centre for Cultivated Plants in Quedlinburg and the INRA Centre de Versailles-Grignon, France contributed to the study.

RecQ proteins can be found in bacteria, fungi, animals and plants. Their function is best investigated in humans, because mutations in these genes lead to disease syndromes like Bloom, Werner or Rothmund-Thomson or to cancer. Their function in plants was less well understood. The team now found that the two model species predominantly analyzed for DNA recombination, the flowering plant Arabidopsis thaliana and the moss Physcomitrella patens, differ specifically in their RecQ4 and RecQ6 genes. Engineering different transgenic plants, the scientists found that RecQ4 is important for normal moss development and for DNA repair, whereas RecQ6, which does not exist in Arabidopsis, strongly enhances gene targeting.

Gene targeting in moss was first published by Reski’s group in 1998 and since then was used to answer many fundamental questions in biology. Moreover, this method was used extensively in biotechnology to create and to exploit knock-out mosses.

“Ever since we published the first knock-out mosses 20 years ago, I was curious to understand why Physcomitrella is orders of magnitude more efficient in gene targeting than any other plant”, explains Reski. Several groups world-wide tried to answer this conundrum, albeit in vain. Teaming up with the experts in Quedlinburg and in Versailles has finally brought success. “We are now planning to express the moss RecQ6 gene in flowering plants to see, if we can significantly enhance their gene targeting also. Thus, we could modify crop plants with outstanding precision in the future”, says Reski.
The biologists at the University of Freiburg are specialized in moss research and have made significant contributions to the development of mosses as global model organisms in biology and biotechnology. Ralf Reski is a biologist and professor of plant biotechnology at the University of Freiburg, Germany. He is also a member of the cluster of excellence BIOSS Center for Biological Signalling Studies and was a senior fellow at the Freiburg Institute for Advanced Studies (FRIAS) and its French counterpart the University of Strasbourg Institute for Advanced Study (USIAS).