Extraction of cholesterol from host cells allows Helicobacter bacteria to generate protected niches of cells in which normal signaling pathways for recruiting immune cells are blocked. 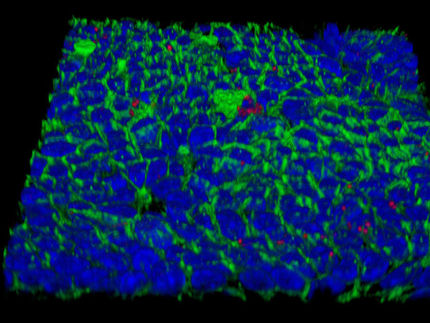 The gastric bacterium H. pylori colonizes the stomachs of around half the human population and can lead to the development of gastric cancer. It is usually acquired in childhood and persists life-long, despite a strong inflammatory defence reaction in the gastric mucosa. Such inflammation is normally beneficial, as it kills invading pathogens and is then resolved. In the case of H. pylori, however, the inflammation never manages to eliminate the invader, and instead persists for decades – which is a driving force in the development of ulcers and cancer. While many persistent bacteria rely on preventing immune detection, persistence in the midst of acute inflammation is a highly unusual feat for a pathogen, and so far it has been completely unclear how Helicobacter is able to do this. Now researchers at the Max Planck Institute for Infection Biology in Berlin have found that by extracting cholesterol from host cell membranes, H. pylori breaks down a vital component needed to assemble the receptors for interferons. These cytokines are key signalling molecules for summoning the adaptive immune system to the infected mucosa – and their absence generates a niche where the bacteria can survive while the inflammation continues unabated in the surrounding area.

While gastritis and gastric ulcer disease used to be put down to stress and dietary factors, it was discovered in the 1980s that the actual culprit is infection with a bacterium, H. pylori. This pathogen is now classed as a type I carcinogen by the WHO, as it is the major risk factor for development of gastric carcinoma. Attempts to develop a vaccine against H. pylori have been unsuccessful and the new results provide the first potential explanation for these failures: H. pylori blocks the signal that would allow infected cells to summon help from the immune system.

Driven by their interest in understanding the mechanisms by which bacterial infections can give rise to cancer, the laboratory of Thomas F. Meyer already discovered over a decade ago that H. pylori expresses an enzyme called cholesterol-α-glucosyltransferase to extract the cholesterol it needs from host cells. Without this enzyme, the bacteria are unable to infect mice. At the time, the group also noted that excess cholesterol in the diet of the mice enhanced clearance of the pathogen but exacerbated inflammation. Exactly how the ability to extract cholesterol was linked to immune evasion remained unclear at the time.

Now, new technologies for growing primary stomach cells in vitro have been instrumental for solving this puzzle. Meyer’s laboratory succeeded in reconstituting the mucosal epithelium of the stomach, yielding so-called “mucosoids” in which gastric cells grow as monolayers with an outer and an inner surface and even produce the mucus that lines and protects the stomach. As a result, the infected “mini-organs” could be kept alive for months.

Infected gastric epithelial cells normally summon immune cells and generate antimicrobial factors that kill the bacteria. This response depends on a crucial immune signaling factor produced by epithelial cells: interferon-γ. Using the mucosoid model, the group found that the bacteria survive as small micro-colonies on top of cells. This turned out to be due to the absence of so-called “lipid rafts” in the cell membranes, which are required for assembly of interferon receptor complexes. Without these, host cells simply did not respond to interferon-γ at all. The lipid rafts are made of cholesterol, and their destruction is mediated by the bacterium’s cholesterol-α-glucosyltransferase.

“Showing how H. pylori persists in the midst of an acute inflammation explains a whole series of observations that have puzzled researchers for decades and has caused us to think of the infection scenario in an entirely new light” says Pau Morey, first author of the study. Francesco Boccellato, who developed the new in vitro model adds: “the mucosoids enable long-term, stable infections to be investigated – and will be an invaluable tool for examining the mechanisms underlying mucosal infections, the mucosal defence and the emergence of cancer.”