Why gold-palladium alloys are better than palladium for hydrogen storage 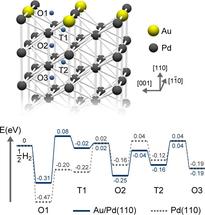 2018 Shohei Ogura, Institute of Industrial Science, The University of Tokyo

Materials that absorb hydrogen are used for hydrogen storage and purification, thus serving as clean energy carriers. The best-known hydrogen absorber, palladium (Pd), can be improved by alloying with gold (Au).

New research led by The University of Tokyo Institute of Industrial Science explains for the first time how Au makes such a difference, which will be valuable for fine-tuning further improvements.

The first step in hydrogen storage is chemisorption, wherein gaseous H2 collides with Pd and adsorbs (sticks) to the surface. Secondly, the chemisorbed H atoms diffuse into the sub-surface, several nanometers deep. A recent article in PNAS reports that the group focused on this slow second step, which is the bottleneck to the overall process.

In pure Pd, only around 1 in 1,000 of the H2 molecules that collide with the metal actually absorb into the interior. Hence, only these can be stored as energy carriers. However, when the Pd surface is alloyed with Au, absorption is over 40 times faster.

It is vital to get the amount of Au just right - hydrogen absorption is maximized when the number of Au atoms is slightly less than half (0.4) of a single monolayer of Pd, according to the study. This was discovered by thermal desorption spectroscopy, and by depth-measurement of the H atoms using gamma-ray emissions.

"We wanted to know what role Au plays," study first author Kazuhiro Namba says. "The Au atoms are mostly at the alloy surface. However, our results showed that hydrogen storage is improved even below this depth, in pure Pd. Therefore, Au must be accelerating the diffusion of hydrogen into the sub-surface, rather than improving its solubility."

This diffusion acts like a typical chemical reaction - its rate is determined by the energy barrier, i.e. the hurdle that the H atoms must overcome to penetrate Pd. The barrier height is the gap between the energies of the chemisorbed H atoms and the transition state they must pass through to reach the first sub-surface site.

According to density functional theory (DFT) calculations, the Au atoms destabilize chemisorbed hydrogen, thus increasing their energy and reducing the barrier. By making the surface a less stable environment for H atoms, this encourages them to penetrate more quickly into deeper sites, instead of lingering at the surface. Photoemission spectroscopy suggests that Au atoms push the energy of the Pd electrons downward, weakening their ability to chemisorb hydrogen.

However, the weakly chemisorbed H atoms are also more likely to simply desorb from the surface; i.e., return to the gas phase. This unwanted process explains why hydrogen storage is maximized with just 0.4 monolayers of Au - if any more Au is added, the desorption of hydrogen outpaces its diffusion into Pd.

"Our study reveals, at the electronic level, how Au alloying controls hydrogen absorption," co-author Shohei Ogura says. "This will help us to design better hydrogen storage materials, which will play a role in carbon-neutral energy transport, as well as solid catalysts for chemical reactions, which often depend on surface-bound hydrogen."