Synthesis of pharmaceuticals with light 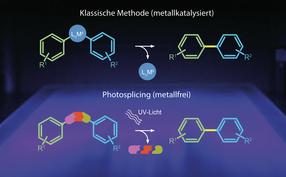 The classical biaryl synthesis route contains catalysts based on heavy metals (above) whereas the new reaction uses a metal-free sulfonamide linker that fragments into gases when exposed to UV-light.

A new synthesis method in organic chemistry enables the production of numerous pharmaceuticals without the use of toxic heavy metals. Scientists from the Leibniz Institute for Natural Product Research and Infection Biology in Jena (Leibniz HKI) discovered this reaction and subsequently developed a method termed photosplicing. This method could revolutionize numerous processes in the chemical industry.

The team of Christian Hertweck observed in a synthesis study that certain ring-shaped molecules, co-called bis-arylsulfonamides, convert into a blue fluorescent substance when exposed to UV light. Analyses revealed that the product of this reaction is a biaryl. The coupling is highly selective for the geometrical configuration, resulting in a high yield of a nearly pure reaction product, despite a multitude of theoretical combination possibilities. The sulfonamide linker in combination with UV light fulfils the same function as heavy metal catalysts used up to now. Contamination of the product by traces of toxic metals can thus be avoided. In order to demonstrate the transferability of this new reaction to a larger scale, the chemists have designed a suitable reactor, termed photosplicer.

First investigations show a wide range of applications for this new photosplicing technology. The researchers were able to synthesize a range of pharmaceutically important biaryls without the use of heavy metals. Among them were active ingredients of blockbuster drugs with more than 1 billion USD annual turnover, such as antihypertensive agents, anti-inflammatories, cytostatic agents, pain relievers or active ingredients for neurodegenerative diseases.

Many pharmaceuticals but also agrochemicals or the displays of electronic devices contain biaryls. Two ring-shaped molecular building blocks are coupled to each other via a simple chemical bond. The precise spatial structure is thereby significant for the efficacy or functionality of the compounds. The two ring-shaped building blocks therefore have to be coupled in the correct position and configuration. For decades heavy metal catalysts have been used for this coupling, mostly palladium-containing compounds. However, these conventional methods, for which the Nobel Prize in Chemistry was awarded in 2010, have disadvantages: the metal catalysts are expensive and traces of the mostly toxic compounds remain in the reaction products.
The annual turnover of pharmaceutical biaryl products is estimated to be above 30 billion USD. The antihypertensives from the active ingredient group of the sartanes account for several billion USD. Even small improvements in the manufacturing processes therefore offer an immense potential for savings or profit.

The leader of the research team, Christian Hertweck, Head of Department at the Leibniz HKI and professor at the Friedrich Schiller University Jena, comments on the novel reaction: ‘We have not worked specifically on the development of a new synthesis method. It was rather a discovery along the way, which our team has noticed attentively and soon we recognized its enormous potential. Such developments cannot be planned on the drawing board and realized in fixed work plans. A free mind, an inspiring team and a collaborative research environment ultimately lead to success – and lucky coincidence also plays a role.’

Florian Kloss, who has discovered the reaction during his doctoral research and who now is head of the transfer group Anti-infectives, says: ‘As coincidental as the first observation of the reaction was, the parallels to metal-catalyzed reactions seemed obvious to us. Nevertheless we were surprised when our subsequent analyses revealed such wide range of potential applications for this new technology. We are confident that we can synthesize a variety of other substances with this method that we do not have an eye on yet. The production of larger quantities of valuable materials is now more of a technical development work.’