Stem Cells Regulate Their Fate by Altering Their Stiffness 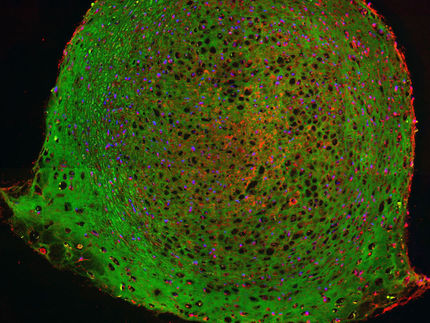 In adults, mesenchymal stems cells (MSCs) are primarily found in bone marrow and they play a vital role in repair of damaged organs. The transformation of a single MSC into complex tissue like cartilage and bone starts with its association with other MSCs in order to form microscopic clusters via a process termed as condensation. While it is known that this condensation step is important for skeletal development the exact role it plays in formation of bone and cartilage is not understood. A team led by Prof. Dr. Prasad Shastri and Dr. Melika Sarem of the Institute for Macromolecular Chemistry at the University of Freiburg present evidence for autonomous control of chondrogenesis in MSCs.

They discovered that reducing the number of cells participating in condensation process leads to the activation of an intrinsic differentiation program. This prompts MSCs to become cartilage cells even in absence of chondro-inductive growth factors irrespective of donor age and sex. Sarem and Shastri further identified that two cell-membrane proteins, Caveolin-1 and N-Cadherin are differentially regulated during the condensation step and function as interactive forces like a Yin-Yang of chondrogenic differentiation. "The fact that we need lesser cells to create better quality tissue is extremely exciting as it opens new avenues for stem cell therapies" summarizes Sarem.

In collaboration with Dr. Oliver Otto, at the University of Greifswald, the Freiburg researchers demonstrated that the chondrogenic potential of MSCs correlates with emergence of a stiffer phenotype and increase in cell size. Their findings allude to a hitherto unknown mechanobiology paradigm in MSC differentiation. “Since MSCs harvested from adult bone marrow are a heterogeneous population of cells and their ability to undergo differentiation into cartilage or bone cells varies from donor to donor, our findings have significant implication for MSC-based strategies for engineering cartilage and bone tissue,” explains Shastri.