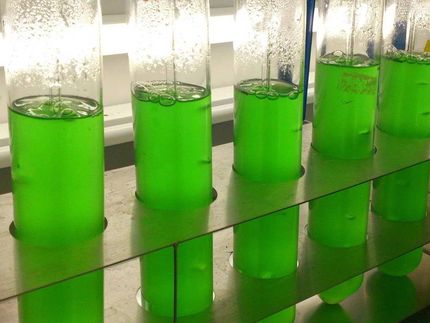 Cyanobacteria in the lab: The new active ingredient was isolated from cultures of the freshwater cyanobacterium Synechococcus elongatus

Arabidopsis thaliana seedlings after germination and 7-day growth: While the control group (left) developed nor-mally, growth was inhibited by 260 µM glyphosate (figure below) or 7dSh (fig-ure above). (scaling identical in all images) 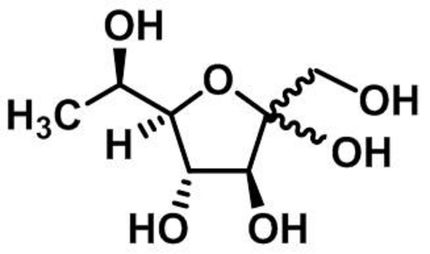 Researchers at the University of Tübingen have discovered a natural substance that could compete with the controversial herbicide glyphosate: The newly discovered sugar molecule synthesized from cyanobacteria inhibits the growth of various microorganisms and plants but is harmless to humans and animals. The joint study was led by Dr. Klaus Brilisauer, Professor Stephanie Grond (Institute of Organic Chemistry) and Professor Karl Forchhammer (Interfaculty Institute of Microbiology and Infection Medicine).

Active ingredients for pharmaceutical or agricultural use often originate from natural substances. These substances can consist of complex chemical structures, but can also be relatively simple. The ingenuity of such active ingredients often lies in their simplicity: Antimetabolites interact with vital processes in the cell by mimicking metabolic products. This disrupts the biological process, which can inhibit cell growth or even kill the cell.

Chemists and microbiologists at the University of Tübingen discovered a very unusual antimetabolite with an impressively simple chemical structure: A sugar molecule with the scientific name "7-deoxy-sedoheptulose (7dSh)". Unlike ordinary carbohydrates, which usually serve as an energy source for growth, this substance inhibits the growth of various plants and microorganisms, such as bacteria and yeasts. The sugar molecule blocks a key enzyme of the shikimate pathway, a metabolic pathway that occurs only in microorganisms and plants. For this reason, the scientists classify the substance as harmless for humans and animals and have already demonstrated this in initial studies.

The rare deoxy sugar was isolated from cultures of the freshwater cyanobacterium Synechococcus elongatus, which is able to inhibit the growth of related bacterial strains. While searching for the cause of this growth inhibition, scientists succeeded in deciphering the structure of the natural compound. Through a newly developed method for the production of 7dSh – a chemoenzymatic synthesis – scientists were able to conduct extensive studies to determine the molecular mechanism of 7dSh.

In detail, the scientists used coupled high-resolution mass spectrometry to obtain precise insights into the inhibition mechanism and discovered that 7dSh blocks DHQS (Dehydroquinatesynthase), an enzyme of the shikimate pathway. One of the best-known inhibitors of this metabolic pathway to date is the controversial herbicide glyphosate. "In contrast to glyphosate, the newly discovered deoxy sugar is an entirely natural product that is believed to have good degradability and low ecotoxicity," says Dr. Klaus Brilisauer. So far, 7dSh inhibits plant growth promisingly. "We see an excellent opportunity here to use it as a natural herbicide."

Scientists hope to replace controversial herbicides in the long term and thus reduce herbicide me-tabolites, which pose a health risk. However, effectiveness in the field, degradability in the soil and harmlessness to livestock and humans would have to be further investigated in comprehensive long-term studies for 7dSh.