How sleep strengthens the immune system 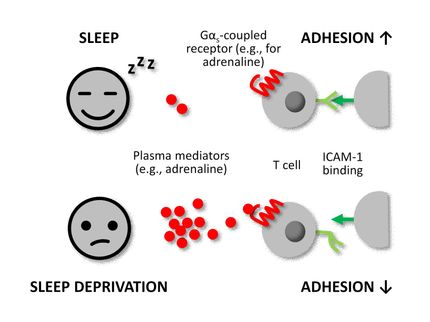 Getting enough sleep is vital to supporting our immune system in fighting off pathogens – so much is common knowledge. But what we don't know is how exactly sleep affects certain immune functions. Scientists at the University of Tübingen and the University of Lübeck have now discovered a new mechanism by which sleep supports the immune system. The team led by Dr. Luciana Besedovsky and Dr. Stoyan Dimitrov from the Institute of Medical Psychology and Behavioral Neurobiology in Tübingen and Dr. Tanja Lange from the Clinic for Rheumatology and Clinical Immunology in Lübeck were able to show that the function of T cells, the white blood cells that are responsible for combating pathogens, was impaired after only three hours without sleep.

The scientists conducted a 24-hour experiment with volunteers: One group was allowed to sleep for eight hours at night, a second group stayed awake for the whole period. During the experiment, blood was regularly taken from the participants. In particular, the research team examined the binding strength of T cells to a molecule named ICAM-1 (intercellular adhesion molecule-1), which enables them to attach to other cells, in a process known as adhesion.

This is important for their function: "T cells circulate constantly in the bloodstream looking for pathogens. Adhesion to other cells enables them to migrate to different areas in the body and, for example, dock onto infected cells in order to subsequently kill them," says Stoyan Dimitrov, first author of the study. As the study shows, the adhesion of T cells was significantly reduced in sleep deprived subjects.

In order to further investigate how sleep affects T-cell function, plasma – the part of the blood that contains soluble substances such as hormones – was taken from sleeping and sleep deprived subjects. This plasma was applied to isolated T cells for a few minutes. Plasma taken from sleep deprived subjects reduced the adhesion significantly compared to the plasma from subjects who had slept.

In another experiment, the team was able to reverse this suppression of T-cell function by blocking Gαs-coupled receptors. Amongst other substances, the stress hormone adrenaline and prostaglan-dins, which play a role in inflammation, bind via these receptors. "This shows that even following brief sleep deprivation soluble molecules activate these receptors and thereby impair the adhesion of the T cells," says Luciana Besedovsky, head of the study.

In parallel experiments, the researchers were also able to show that some of the soluble molecules that bind to this receptor class, such as adrenaline, prostaglandins and the neuromodulator adeno-sine, strongly impair adhesion when administered directly to T cells. The same substances are also strongly elevated in a number of pathological conditions, such as chronic stress or cancer. "This means that our findings also have clinical relevance outside sleep research. They could explain why the immune system is suppressed in some diseases," says Lange. Besedovsky summarizes: "Just three hours without sleep are sufficient to reduce the function of important immune cells. Our results show a potential fundamental mechanism by which sleep helps us fight infection."