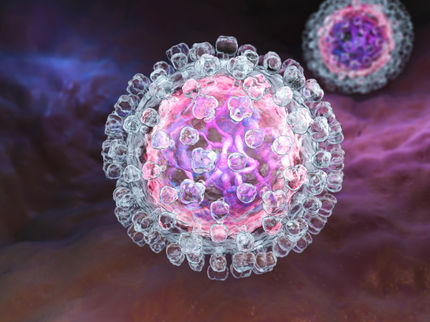 Illustration of a hepatitis C virus.

The treatment of hepatitis C has been based on specific effective antiviral medications for a number of years. Since future development of resistance cannot be ruled out, alternative treatment options are being researched as well. So-called cell entry inhibitors are considered to be promising candidates. In combined efforts with colleagues from the Leibniz University Hannover, scientists from the Helmholtz Centre for Infection Research (HZI) and the TWINCORE pinpointed the target site on the virus and developed improved drug candidates.

Some 400,000 people around the world succumb to the consequences of a hepatitis C infection each year. The hepatitis C virus is usually transmitted by blood. An infection can remain undetected for long periods of time, because the disease initially progresses largely without symptoms and manifest flu-like symptoms are often not recognised as being related to a hepatitis C infection. It is particularly insidious that the disease progresses undetected and can lead to cirrhosis or liver carcinoma. More than 70 million people throughout the world are afflicted by a chronic hepatitis C infection. "Treatment with effective antiviral medications works very well, but has become available only a few years ago," says Prof Thomas Pietschmann, who is the director of Experimental Virology at the Helmholtz Centre for Infection Research (HZI) and at the TWINCORE, which is a joint facility of the HZI and the Hannover Medical School. "So far, we are not able to accurately estimate to which extent resistance may develop in the future. The development of alternative treatment strategies therefore continues to be key."

In various studies, drugs approved for the treatment of migraine headaches (flunarizine) or allergies (chlorcyclizine) have proven effective against hepatitis C viruses as well. Since they prevent the viral genome from entering body cells, they are called cell entry inhibitors. The main aim of any virus is to infiltrate its genome into a host cell in order to proliferate. The first step of the attack involves a natural uptake process of our cells called endocytosis: When a virus contacts the cell membrane via a receptor, the membrane invaginates at this site and pinches off a small vesicle into the inside of the cell. The virus is then present inside this vesicle. But the surrounding cell membrane still separates the virus from its actual target, i.e. the inside of the cell. Over time, the pH inside the vesicle decreases - which is also a natural process taking place in our cells. The acidic environment then causes a structural change in the viral envelope, which allows the envelope to fuse with the surrounding cell membrane. By that, the virus injects its genetic information into the inside of the cell - and to reach its target.

"Viruses are very well-adapted to the conditions and processes in our cells," says Dominic Banda, who is the principal author of the study and now works at the Department for Clinical Biology, Microbiology and Immunology of the University of Ghent. "In order to be able to fight them successfully, we need to discover new targets and then make use of them."

In their current study, the researchers took a closer look at promising cell entry inhibitors and their effect on hepatitis C viruses: Where do they dock onto the virus? What is their mechanism of action? How can they be optimised? To answer these questions, the scientists genetically altered hepatitis C viruses bit by bit and monitored their response to the tested drug. "This allowed us to detect a small specific region in the viral envelope, which appears to interact with the drug. Like a wedge in a gear, the drug prevents the viral envelope from fusing with the cell membrane," Banda explains. "It is important to know exactly where the interaction takes place in order to be able to predict which versions of the virus will respond to which drug." Not all hepatitis C viruses are alike; there are seven different genotypes of hepatitis C viruses. Viruses of genotype 2, in particular, can be stopped by this class of cell entry inhibitors.

In addition, the researchers were able to show that the region on the viral envelope they detected also determines the pH at which the virus is induced to undergo the membrane fusion. "Some types of virus need a lower pH than others, this can be quite different," Pietschmann says. "Being able to detect the region that is responsible for the pH sensitivity of one type of virus is another useful result, as it is important for the basic understanding of the processes going on during a hepatitis C infection."

In cooperation with the team of Prof Andreas Kirschning from the Institute for Organic Chemistry and the Centre of Biomolecular Drug Research (BMWZ) at the Leibniz University Hannover, the HZI team developed and synthesised additional structurally related flunarizine compounds and tested them for their efficacy against hepatitis C viruses. "We were able to show that compounds with a similar structure have the same effect: They prevent the membrane fusion of hepatitis C viruses," Kirschning says. "In this context, one substance proved to be especially effective - p-methoxy-flunarizine."

In future studies, the research team aims to find out if cell entry inhibitors bind to the virus and, if so, analyse the details of this interaction. "It is important to understand the mechanism of action in all detail in order to be able to develop perfectly fitting and highly effective medications," Pietschmann says. "Perhaps even an agent with multiple binding properties that works with several versions of the virus and shows broader activity - that of course would be optimal."