A molecular switch for the X chromosome 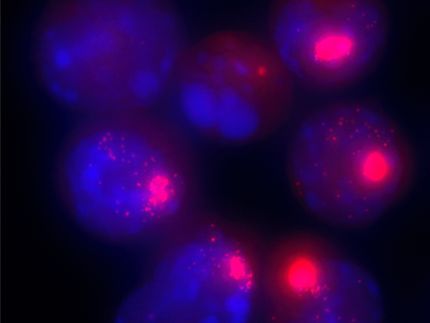 Nuclei of female cells. Xist molecules responsible for inactivating the second X chromosome are labeled with a red dye.

A large number of genes have to be switched on or off at different times during development. A particular challenge occurs when two copies of the same gene must acquire opposing states of activation within the same cell, as it is the case, for example, for the two X chromosomes in the female organism. Scientists at the Max Planck Institute for Molecular Genetics in Berlin have analyzed this process and developed a basic model for the initiation of X inactivation by the RNA molecule Xist. They found that Xist must be repressed by a factor that also lies on the X chromosome and that can only act on the chromosome on which it is located. For correct regulation of Xist, a second X chromosomal factor is required, that activates all Xist genes regardless of the chromosome on which they are located. The model presents a general mechanism to initiate X chromosome inactivation in various mammalian species and sets the stage for identifying the molecular mechanisms that are required for this process.

Gene dosage is the number of identical genes present in an active form in the organism. In mammals, gene dosage is tightly constrained. If genes are missing or additional gene copies are present due to congenital diseases, this can lead to severe disabilities. A well-known example is Down syndrome (trisomy 21), which is caused by the presence of a third copy of chromosome 21 resulting in an increased dose for all its genes in each cell of the organism.

The correct gene dosage is also important for the genes carried by the X chromosome. "For normal function, each organism, whether male or female, only needs the gene dosage provided by a single X chromosome," explains Edda Schulz, head of the Max Planck Research Group “Regulatory Networks in Stem Cells” at the Max Planck Institute for Molecular Genetics in Berlin. "However, the female organism usually has two X chromosomes. Thus, it has to ensure that the genes of one X chromosome are switched off or inactivated."

Repressors and activators in cis and trans

It has been shown by numerous studies that Xist is regulated by many different factors. Some regulators suppress Xist (repressors), while others enhance it (activators). Furthermore, some factors only affect genes that lie on the same chromosome as the factor itself – which is called cis regulation. Other factors affect all copies of their target gene, irrespectively of whether they are located on the same or another chromosome. This is called trans-regulation. However, until now no general model existed that could explain how these factors must act together to ensure correct onset of X inactivation.

Schulz and her team therefore developed a range of mathematical models to systematically screen alternative interaction modes of activators and repressors. They classified the factors involved in different categories, depending on whether they activate or repress Xist, whether they only act on the X chromosome on which they are located or on both X chromosomes in the cell, and whether they were silenced during X inactivation or maintain their function. "Only one of our models can ensure Xist activation on exactly one of two X chromosomes," explains Verena Mutzel, who performed the model simulations. "In order to ensure that one X chromosome remains active in all cells, male and female, the repressor for Xist must be cis-acting, which means, it can only affect a target gene located on the same chromosome as itself. However, to guarantee that only one X chromosome remains active in cells with more than one X chromosome, all X chromosomes must also have a trans-acting activator of Xist"

The scientists checked their model in various cell culture experiments. In addition to male and female cells, they also used cell lines with three or more X chromosomes and genetically modified cell lines, where Xist could be activated on demand. Genes on the X chromosome are repressed by the long non-coding RNA Xist. However, according to their model, Xist itself is also repressed by a factor that is located on the same X chromosome. Therefore, the X chromosome remains active in cells with only one X. In cells with two X chromosomes, the Xist activator acting in trans is present in two copies, which allows it to overcome the repression by the Xist repressor. Thus, Xist becomes active and the genes on the affected X chromosome get silenced. The silencing includes the trans activator on the respective chromosome, so that it cannot inactivate the second X chromosome.

„Interestingly, the model can also explain X inactivation patterns in humans with Turner or Klinefelter syndromes“, Schulz says. Turner syndrome is a congenital disease affecting women, who only have one sex chromosome (X0). Since only a single copy of the trans activator for Xist is present, the genes on the existing X chromosome remain active. Men affected by Klinefelter syndrome possess a second X chromosome in addition to the usual X and Y chromosomes. In these cases, one of the two X chromosomes gets inactivated, as it is the case in female organisms.

Moreover, the model also explains the different Xist patterns that have been described in different mammalian species. "So far it has been suggested that X inactivation is ensured by different mechanisms in different species. However, the differences can also arise from the same regulatory network if the interaction strengths between network components are different. We therefore propose that the regulatory principles employed by different mammalian species are less diverse than previously thought and that different routes to inactivate an X chromosome could arise due to quantitative differences in reaction rates rather than qualitative differences in network architecture”, says Schulz.