09-May-2019 - POSTECH - Pohang University of Science and Technology 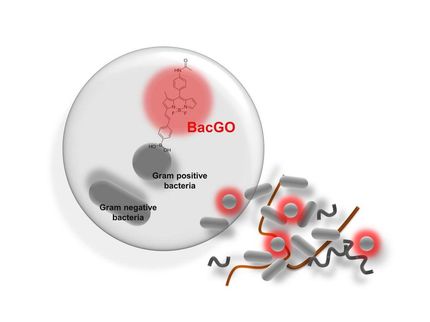 BacGO, a novel Gram-positive bacterial probe, was originated from a fluorescent library carrying a boronic acid motif for binding to peptidoglycan on the cell wall. BacGO can be used to identify Gram-positive planktonic bacteriain mixedsamplehaving diversity andcomplexity.

Two years ago, a group of infants died at the university hospital and it was found to be Gram-negative bacteria that caused their death. The Gram-negative bacteria turn into pink color and Gram-positive bacteria turn into violet color when stained using the Gram stain which is a bacterial staining method used since 1884. Usually, bacteria that cause tetanus, pneumonia, and food poisoning are types of Gram-positive bacteria. The Gram staining is a standard staining method that has been used to distinguish bacteria for a long time, however, there have been many difficulties with this method, requiring multi-steps of procedures and experienced technical skills.

Prof. Young-Tae Chang, Dr. Nam Young Kang, Dr. Hwa-Young Kwon, and Xiao Liu of Pohang University of Science and Technology (POSTECH) Department of Chemistry developed a fluorescent probe, BacGo that can detect Gram-positive bacteria precisely and promptly. The research team used bacterial sludge from wastewater for the demonstration experiment. They successfully monitored the proportion of bacteria in the process of wastewater treatment and confirmed the possible application to clinical diagnosis of keratitis.

The Gram staining was first developed by a Danish scientist, Christian Gram, in 1884 and it has been used so far as the golden standard to classify bacteria. However, it has several obstructions. For example, using a set of dyes such as crystal violet and safranin, the method can only be applied to fixed samples (a chemical process that kills bacteria), not to live bacteria. It also involves multiple steps of process to go through by sequential using of crystal violet and safranin dyes. To overcome these issues, there have been several fluorescent probes developed with better sensitivity than the Gram staining, yet, they have limited selectivity against Gram-positive bacteria and slow detection of bacteria. In this regard, the developed probes so far are not suitable for universal bacterial discrimination such as in sludge from wastewater and other work that requires rapid detection.

This fluorescent probe can specifically select various Gram-positive bacteria. Based on this accomplishment, the research team demonstrated the application to sludge from wastewater and the mice infected by keratitis. As a result, they confirmed that BacGo can monitor the proportion of bacteria in sludge during the treatment of wastewater. Also, the experiment with the keratitis infected mice showed that the new probe can diagnose the infection of bacteria very precisely. This illustrates the possibility of its application to clinical diagnosis.

Professor Young-Tae Chang who led the research team showed his anticipation in his comment, "BacGo is different from the Gram stain which has been commonly used. With this new probe, we can monitor various live Gram-positive bacteria through minimal staining process. It not only can replace the former fluorescent probe for screening Gram-positive bacteria which have many limitations, but also it can be utilized in many different applications such as monitoring wastewater and clinical diagnosis of bacterial infections."