20-May-2019 - POSTECH - Pohang University of Science and Technology

Visualizing microglia in brain tissue with a fluorescence turn-on substrate 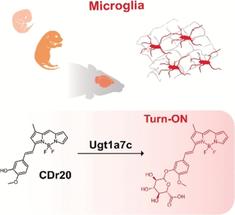 Part of the immune system in the brain is made up of so-called microglia cells. Korean and Singaporean researchers have now developed a fluorescent probe that specifically labels this type of macrophage. The cells were visualized in cell culture and in the live brains of rodents. As detailed in the journal Angewandte Chemie, a gene product expressed in microglia triggers the probe into a fluorescing state, which is detected through live-cell fluorescence imaging.

Detecting and tracking of cell types in live cell tissue usually relies on appropriate immunostaining methods. These methods involve developing antibodies that recognize cell-specific proteins, and then detecting the antibodies through attached fluorescent dyes. However, direct staining methods with fluorescing probes could do without expensive antibody production. Therefore, Young-Tae Chang at the Pohang University of Science and Technology, Korea, and colleagues developed a microglia-selective fluorogenic probe. Moreover, as its fluorescence is induced through gene expression, this probe could be useful for the detection and investigation of developing neural diseases.

To discover the fluorogenic probe, the researchers screened a library of derivatives of a promising candidate compound for their microglia binding abilities. The best probe identified was called CDr20, which stands for “cell designation red 20”, and it selectively recognized microglia in brain tissue.

The molecular base of this recognition was also studied. The fluorogenic probe contains an aromatic styryl component, which is functionalized with a hydroxy group. Without this function, the binding was not specific and no fluorescence signal was detected. Subsequently, the researchers looked for the exact target of the probe. Genetic studies revealed that gene expression of a protein called Ugt1a7c was linked to fluorescence signaling; thus, it was clear that enzymatic activity of this protein induced the fluorescence.

The scientists found that the Ugt1a7c protein catalyzed the coupling of CDr20 with a glucuronic acid moiety, and only with this unit attached did CDr20 fluoresce. The Ugt1a7c gene belongs to the Ugt gene family of enzymes, and the authors note that, “interestingly, in the Ugt gene family, the Ugt1a7c gene was the only member enriched in microglia.” This would explain the specific labeling: microglia express the Ugt1a7c enzyme, which adds a glucuronosyl group to the phenolic moiety of CDr20, and turns on the fluorescence.

Selective microglia labeling and imaging also worked in live brains. The researchers observed cell-specific fluorescence when they incubated a whole mouse embryo with the probe, or when they injected the CDr20 probe into a mouse after systemic inflammation. Microglia are the main immune respondents to infections in the brain.

Several neural disorders, including Alzheimer’s disease and stroke, can be linked to inflammatory processes. Therefore, the new fluorogenic probe could be a useful approach to detecting microglia development in brains.