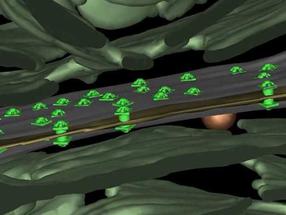 The connections between cells of an Anabaene cell formation are furnished with numerous special channels (light green).

Researchers from ETH Zurich and the University of Tübingen have taken a high-resolution look at the structure and function of cell-to-cell connections in filamentous, multicellular cyanobacteria. This enables them to explain how these microorganisms regulate the transport of various substances between the individual cells.

Also known as blue-green algae, cyanobacteria are a special class of bacteria that are able to perform photosynthesis. In evolutionary terms, they are ancient. Their predecessors – which first emerged on earth some 2.5 billion years ago – paved the way for higher forms of life thanks to their ability to produce oxygen by photosynthesis.

Some cyanobacterial species are filamentous, multicellular organisms that have developed differentiated cell functions. Some cells perform photosynthesis, while others absorb atmospheric nitrogen. The cyanobacteria obtain energy in the form of glucose through photosynthesis; they use the nitrogen to produce amino acids, the building blocks of proteins.

For the cyanobacteria, this poses the problem of how the individual cells can communicate and exchange substances. The photosynthetic cells have to keep their nitrogen-fixing sister cells supplied with glucose; by the same token, amino acids need to be transported in the opposite direction. To this end, cyanobacteria have developed special cell junctions that permit the exchange of nutrients and messengers across cell boundaries, without the cells being fused together.

Elucidating the structure in cellular context

To date, very little was known about the detailed structure and precise functioning of the cell junctions in multicellular, filamentous cyanobacteria. In the latest issue of the scientific journal Cell, a group of researchers from ETH Zurich and the University of Tübingen presents an unprecedented degree of detail on the structure and function of the cell-to-cell connections, referred to as septal junctions, in the Anabaena genus.

The researchers reveal that the connecting channels are composed of a protein tube that is sealed with a plug at both ends. Moreover, this tube is covered with five-armed protein elements, which are arranged much like a camera aperture.

The channels connect the cytoplasms of two neighbouring cells by passing through the different membranes and cell walls. The cells are separated by an ultra-thin gap, just a few nanometres wide.

“Researchers have so far failed to clarify these details with conventional electron microscopy. By extending cryo-electron microscopy, we were able to gain a degree of precision never before achieved,” says Professor Martin Pilhofer from the Institute of Molecular Biology and Biophysics at ETH Zurich.

Gregor Weiss, Pilhofer’s doctoral student, developed a process of preparing the cyanobacteria in such a way that the channels could be visualised via cryo-electron microscopy. Using frozen cyanobacteria, Weiss “milled” the junction between two cells, layer by layer, until his sample was thin enough. Without this pre-processing, the spherical cells would have been too thick for cryo-electron microscopy.

“Due to the complex structure of the connecting channels, we suspected there was a mechanism to open and close them,” said Karl Forchhammer, Professor for Microbiology at the University of Tübingen. He and his team were in fact able to show how the cells of the complex communicate with each other under different stress conditions. They stained cyanobacteria chains with a fluorescent dye and then bleached individual cells with a laser. The researchers then measured the influx of the dye from neighbouring cells.

Using this method, they were able to show that the channels actually close when treated with chemicals or in the dark. The filigree cap structure of a channel closes like an iris and interrupts the exchange of substances between the cells; the researchers recognised this phenomenon through the varying degree of fluorescence they observed.

“This closing mechanism protects the entire multicellular organism,” Forchhammer says. For example, it can prevent a cell from passing on harmful substances to its neighbouring cells, which could destroy the whole organism. The cyanobacteria can also use the channels to prevent the cell contents of the entire network from leaking out if individual cells are mechanically damaged.

With their study, the researchers are able to show that in the course of evolution, multicellular organisms of different lineages repeatedly and independently “invented” cell junctions. “It emphasises just how important it is for a multicellular organism to be able to monitor the transport of substances between its individual cells,” Pilhofer says. By elucidating the channel structure and function in cyanobacteria, the ETH researchers are adding another piece to the puzzle. “As far as we are concerned, this is fundamental biological research, without focusing on any potential application. The new data rather gives us a greater understanding of the evolution of complex life forms,” the ETH professor explains.