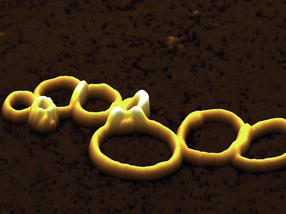 Microscopic image of individual rings. The largest has a diameter of about 500 nanometers.

The tiny rings that chemists at the Center for Nanointegration (CENIDE) at the University of Duisburg-Essen (UDE) create in the laboratory are as small as a bacterium. Self-organized, individual polymer chains form the flexible structures that can even squeeze themselves through cell membranes. This would enable them to deliver active substances in a very targeted manner.

Take some chloroform, a few milligrams of polymer and mingle this solution with a soap mixture. This results in an emulsion from which chloroform slowly evaporates for several days. What remains are small polymer nanoparticles that consist of small rings inside. The structure looks like a striped Easter egg: many rings lie on top of each other, the largest in the middle, the smallest at the top and bottom. To stabilize them, they are chemically cross-linked in the core and then separated from each other.

"It is in general difficult to make rings from such soft matter as polymers," explains Andrea Steinhaus, PhD student in the research group of junior professor André Gröschel. "But we have found a good possibility that can be easily scaled up. This is immensely important with regard to industrial production".

The team of scientists also succeeded in producing rings with two different sides for the first time. They are called Janus nanorings after the Roman god with two faces: If you look at them like a bagel cut open to smear, the upper half is made of a different polymer than the lower half. This allows different properties to be set that are suitable for the respective application.

In the next step, the chemists want to manufacture discs and examine various filling patterns. The fundamental question here is the same: Which method can be used to build which structure? Because after all, it is essential for many applications to be able to specifically form complex nanostructures.