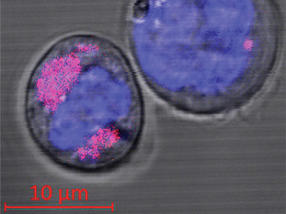 Two CD34+ stem cells containing carbon nanoparticles (coloured magenta); the cell nuclei can be seen in blue. The researchers found that the nanoparticles are encapsulated in the cell lysosomes.

Carbon nanoparticles are a promising tool for biomedical applications, for example for targeted transportation of biologically active compounds into cells. A team of researchers from the Physics, Medicine and Chemistry departments at Heinrich Heine University Düsseldorf (HHU) has now examined whether these particles are potentially dangerous for the organism and how cells cope with them once they have been incorporated.

Nanoparticles are smaller than five nanometres – a nanometre being one millionth of a millimetre – which corresponds approximately to the size of macromolecules. Such tiny particles are very easily absorbed in body cells. There are two aspects to this feature. Firstly, it makes nanoparticles good vehicles for transporting a broad range of compounds or substances attached to them into normal diseased cells in a targeted manner.

On the other hand, they can also pose health risks, for example in connection with particulate matter. One of the ways that particulate matter is created is in combustion processes, and part of that can be classified as nanoparticles. These extremely small particles can overcome the blood-air barrier and penetrate the body: The bronchial mucosa in the lungs doesn’t filter out the particles. Instead, they make their way into the pulmonary alveoli and from there into the bloodstream.

Together with work groups from the Chemistry department, HHU researchers from the Institute of Experimental Condensed Matter Physics working under Prof. Dr. Thomas Heinzel and from the Department of Haematology, Oncology and Clinical Immunology working under Prof. Dr. Rainer Haas have now studied what happens when body cells absorb such nanoparticles. The researchers used nanoparticles made from graphene; this is a special form of carbon that comprises two-dimensional layers of hexagonal carbon rings. They added these to special haematopoietic stem cells referred to as CD34+ stem cells. These cells are particularly sensitive to damaging environmental influences on account of their ability to divide throughout their lifespan. The assumption is that these cells would be damaged more by nanoparticles – if at all – than the more robust other cell types.

The interdisciplinary team of researchers based in Düsseldorf was able to demonstrate that the carbon nanoparticles get into the cells, where they are encapsulated in special organelles called lysosomes. The lysosomes serve as a type of waste removal unit for the body where foreign bodies accumulate and are normally broken down with the help of enzymes. However, the researchers didn’t observe any such process over the duration of the experiments, which lasted for several days.

When comparing the active genes (“gene expression”) of stem cells with and without the addition of nanoparticles, the researchers found that only one of a total of 20,800 recorded expressions had changed; minor effects were determined in a further 1,171 gene expressions.

Prof. Heinzel had this to say regarding the findings: “Encapsulation of the nanoparticles in the lysosomes ensures that these particles are stored securely at least for a few days – for the duration of our experiments – and cannot damage the cell. This means the cell remains viable without any major change in gene expression.” This insight is important if nanoparticles are to be used to deliver drugs into the cell. The experimental framework used here does not allow for any long-term statements to be made regarding any increased probability of cell mutation resulting in cancer.