Nanodiamonds in the brain 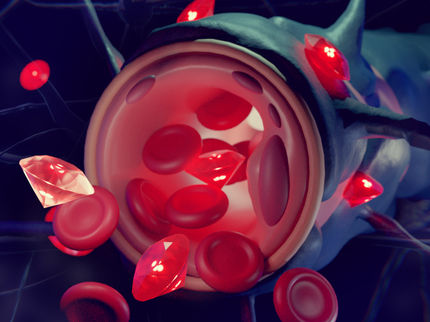 Albumin-coated nano-diamonds can cross the blood-brain barrier and be used for diagnostic and therapeutic purposes in the brain.

The recording of images of the human brain and its therapy in neurodegenerative diseases is still a major challenge in current medical research. The so-called blood-brain barrier, a kind of filter system of the body between the blood system and the central nervous system, constrains the supply of drugs or contrast media that would allow therapy and image acquisition. Scientists at the Max Planck Institute for Polymer Research (MPI-P) have now produced tiny diamonds, so-called "nanodiamonds", which could serve as a platform for both the therapy and diagnosis of brain diseases.

The blood-brain barrier is a physiological boundary layer that works highly selectively and thus protects the brain: On the one hand, pathogens or toxins are effectively prevented from penetrating the brain, on the other hand, however, necessary messengers and nutrients can pass through them unhindered. This selectivity makes it difficult for physicians to examine or treat the brain because drugs or contrast agents for imaging procedures cannot overcome the barrier.

Scientists led by Dr. Jana Hedrich, Prof. Dr. Heiko Luhmann and Prof. Dr. Tanja Weil, in cooperation with the University of Ulm and the University Medical Center of the Johannes Gutenberg University in Mainz have now investigated the suitability of a system based on nanodiamonds as diagnostic and therapeutic method.

Nano-diamonds with a size in the range of a millionth of a meter have the advantage of high biocompatibility: they are not degradable for the body, should be well tolerated and are therefore potentially suitable for both diagnostic and therapeutic purposes. For their research, the scientists have modified the diamonds in two ways: A coating with a biopolymer based on the most abundant protein in human blood, “serum albumin”, enables the diamonds to be absorbed into the brain and later to be combined with drugs. "Diamonds are chemically non-reactive, which means that it is difficult to bind drug molecules," says Jana Hedrich and Tanja Weil. "The albumin coating enables us to create a stable coating and bind almost any medication to it.”

As a further modification, a defect was specifically introduced into the diamond by replacing an atom in the diamond, which consisting of carbon, with a nitrogen atom. Furthermore, there is an empty space in the crystal directly next to this nitrogen atom. "A diamond is normally very clear and, ideally, flawless - light can therefore easily pass through it," explains Hedrich. "By making targeted changes to the lattice structure, we create defects that allow us to detect the diamond using laser beams or magnetic resonance tomographs: It ‘shines’ so to speak”. In this way, researchers can also use the diamond for diagnostic purposes.

The newly developed system has the advantage that it can be adapted to the person to be treated and could thus permit highly individual diagnosis and therapy. A modification of the surface of the diamonds, for example, could ensure that only certain cell types in the brain are supplied with drugs and that tumors, for example, could be treated specifically. The scientists see their system as an important step in the diagnosis and treatment of brain diseases such as neurodegenerative diseases and brain tumors. By combining luminous diamonds with compatible biopolymers, they have for the first time developed a system that combines the advantages of high biocompatibility, long stability, a simple combination with various drugs and detection by medical methods.