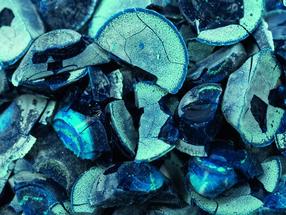 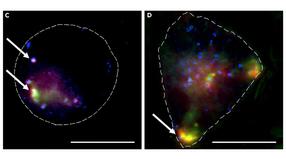 Scientists from the University of Cambridge have developed a platform that uses nanoparticles known as metal-organic frameworks to deliver a promising anti-cancer agent to cells.

Research led by Dr David Fairen-Jimenez, from the Cambridge Department of Chemical Engineering and Biotechnology, indicates metal-organic frameworks (MOFs) could present a viable platform for delivering a potent anti-cancer agent, known as siRNA, to cells.

Small interfering ribonucleic acid (siRNA), has the potential to inhibit overexpressed cancer-causing genes, and has become an increasing focus for scientists on the hunt for new cancer treatments.

Fairen-Jimenez's group used computational simulations to find a MOF with the perfect pore size to carry an siRNA molecule, and that would breakdown once inside a cell, releasing the siRNA to its target.

Some cancers can occur when specific genes inside cells cause over-production of particular proteins. One way to tackle this is to block the gene expression pathway, limiting the production of these proteins.

SiRNA molecules can do just that - binding to specific gene messenger molecules and destroying them before they can tell the cell to produce a particular protein. This process is known as 'gene knockdown'. Scientists have begun to focus more on siRNAs as potential cancer therapies in the last decade, as they offer a versatile solution to disease treatment - all you need to know is the sequence of the gene you want to inhibit and you can make the corresponding siRNA that will break it down. Instead of designing, synthesising and testing new drugs - an incredibly costly and lengthy process - you can make a few simple changes to the siRNA molecule and treat an entirely different disease.

One of the problems with using siRNAs to treat disease is that the molecules are very unstable and are often broken down by the cell's natural defence mechanisms before they can reach their targets. SiRNA molecules can be modified to make them more stable, but this compromises their ability to knock down the target genes. It's also difficult to get the molecules into cells - they need to be transported by another vehicle acting as a delivery agent.

The Cambridge researchers have used a special nanoparticle to protect and deliver siRNA to cells, where they show its ability to inhibit a specific target gene.

Fairen-Jimenez leads research into advanced materials, with a particular focus on MOFs: self-assembling 3D compounds made of metallic and organic building blocks connected together.

There are thousands of different types of MOFs that researchers can make - there are currently more than 84,000 MOF structures in the Cambridge Structural Database with 1000 new structures published each month - and their properties can be tuned for specific purposes. By changing different components of the MOF structure, researchers can create MOFs with different pore sizes, stabilities and toxicities, enabling them to design structures that can carry molecules such as siRNAs into cells without harmful side effects.

"With traditional cancer therapy if you're designing new drugs to treat the system, these can have different behaviours, geometries, sizes, and so you'd need a MOF that is optimal for each of these individual drugs," says Fairen-Jimenez. "But for siRNA, once you develop one MOF that is useful, you can in principle use this for a range of different siRNA sequences, treating different diseases."

"People that have done this before have used MOFs that don't have a porosity that's big enough to encapsulate the siRNA, so a lot of it is likely just stuck on the outside," says Michelle Teplensky, former PhD student in Fairen-Jimenez's group, who carried out the research. "We used a MOF that could encapsulate the siRNA and when it's encapsulated you offer more protection. The MOF we chose is made of a zirconium based metal node and we've done a lot of studies that show zirconium is quite inert and it doesn't cause any toxicity issues."

Using a biodegradable MOF for siRNA delivery is important to avoid unwanted build-up of the structures once they've done their job. The MOF that Teplensky and team selected breaks down into harmless components that are easily recycled by the cell without harmful side effects. The large pore size also means the team can load a significant amount of siRNA into a single MOF molecule, keeping the dosage needed to knock down the genes very low.

"One of the benefits of using a MOF with such large pores is that we can get a much more localised, higher dose than other systems would require," says Teplensky. "SiRNA is very powerful, you don't need a huge amount of it to get good functionality. The dose needed is less than 5% of the porosity of the MOF."

A problem with using MOFs or other vehicles to carry small molecules into cells is that they are often stopped by the cells on the way to their target. This process is known as endosomal entrapment and is essentially a defence mechanism against unwanted components entering the cell. Fairen-Jimenez's team added extra components to their MOF to stop them being trapped on their way into the cell, and with this, could ensure the siRNA reached its target.

The team used their system to knock down a gene that produces fluorescent proteins in the cell, so they were able to use microscopy imaging methods to measure how the fluorescence emitted by the proteins compared between cells not treated with the MOF and those that were. The group made use of in-house expertise, collaborating with super-resolution microscopy specialists Professors Clemens Kaminski and Gabi Kaminski-Schierle, who also lead research in the Department of Chemical Engineering and Biotechnology.

Using the MOF platform, the team were consistently able to prevent gene expression by 27%, a level that shows promise for using the technique to knock down cancer genes.

Fairen-Jimenez believes they will be able to increase the efficacy of the system and the next steps will be to apply the platform to genes involved in causing so-called hard-to-treat cancers.

"One of the questions we get asked a lot is 'why do you want to use a metal-organic framework for healthcare?', because there are metals involved that might sound harmful to the body," says Fairen-Jimenez. "But we focus on difficult diseases such as hard-to-treat cancers for which there has been no improvement in treatment in the last 20 years. We need to have something that can offer a solution; just extra years of life will be very welcome."

The versatility of the system will enable the team to use the same adapted MOF to deliver different siRNA sequences and target different genes. Because of its large pore size, the MOF also has the potential to deliver multiple drugs at once, opening up the option of combination therapy.

More about University of Cambridge