With elegant appendages, the bacteria increase their surface area and thus improve their food intake 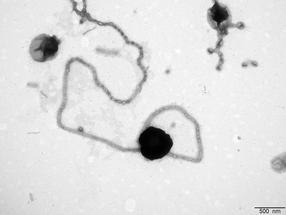 Electron microscope image of a long pearl chain on a flavobacterium.

For the first time, scientists in Bremen were able to observe bacteria forming pearl chains that protrude from the cell surface. These pearl chains serve to better absorb and store substances from the environment.

Bacteria have no mouth. They eat by absorbing substances from their environment via their cell wall. However, there are natural physical limits to this way of “eating”. To bypass these limits, some bacteria enlarge their cell surface. For example, they form tubular extensions or small bubbles, so called vesicles. A group of researchers led by Jens Harder from the Max Planck Institute for Marine Microbiology in Bremen, Germany, has now observed for the first time that bacteria initially form tubes and then vesicles.

„We have investigated a flavobacterium that is widespread in the North Sea,“ says Harder. These bacteria live in a nutrient-poor, so-called oligotrophic, environment. It is therefore advantageous for them to enlarge their cell surface and thus have more space to hold and absorb sugar and other food with enzymes on the surface. „Bacteria that have vesicles or tubes for this purpose have already been observed," Harder continues. "The flavobacteria we studied have one after the other: First we observed tubes, then regular strings of pearls. The formation of pearls probably results from a twisting of the fatty acid molecules in the cell wall."

The flavobacteria examined in this study appear in large numbers in so-called bacterial blooms in the North Sea, which occur after the annual algae spring blooms. They have a special set of enzymes to use laminarin, the storage sugar of the algae. Harder and his colleagues fed the bacteria coloured laminarin to check whether there was an exchange between the pearl chains and the „main cell“. And indeed, the dye also appeared in the pearl chains. „We think that enzymes on the surface of the pearl chains capture, hold and break up the laminarin sugar and then deliver it to the cell,” Harder explains. It seems to pay. „The mass occurrence of flavobacteria after algal blooms clearly reveals their ecological success.”