Malaria pathogens under the X-ray microscope 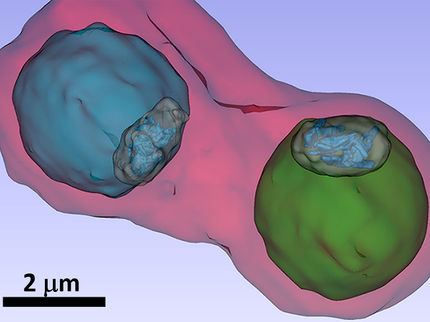 The image shows details such as the vacuole of the parasites (colored in blue and green) inside an infected blood cell. 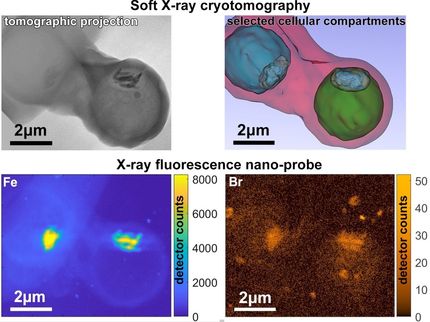 The combination of different measurement techniques shows how the presence of bromoquine hinders the detoxification process of the plasmodia.

Malaria is one of the most threatening infectious diseases in the world. An international team has now been able to investigate malaria pathogens in red blood cells in vivo using the BESSY II X-ray microscope and the ALBA and ESRF synchrotron sources. The scientists reveal the mechanisms used by active substances to attack the pathogen. This could contribute to improve treatment strategies and drug design.

Around 40 percent of humanity lives in regions affected by malaria, around 200 million people contract the disease every year, and an estimated 600,000 people die as a result. Anopheles mosquitoes that transmit malaria pathogens are spreading due to climate change. These pathogens are unicellular organisms (plasmodia) that settle inside the red blood cells of their hosts and metabolize hemoglobin there to grow and multiply.

The main avenue to deal with the disease is treatment by active compounds in the quinoline family and, more recently, from the artemisinin family. However, the exact way that active compounds keep the pathogenic plasmodia in check has so far been subject to controversy.

One thesis relates to the digestive process of the pathogenic plasmodia. Research has shown that plasmodia store large amounts of hemoglobin in their digestive vacuole, an organelle that resembles a bag. This releases iron-containing hemozoin molecules that the plasmodia cannot tolerate. The plasmodia manage to crystallize these toxic hemozoin molecules so that they can no longer poison them. The idea was that active compounds might prevent the formation of hemozoin crystals and thus boycott the detoxification process of the plasmodia.

A team led by Sergey Kapishnikov from the University of Copenhagen and the Weizmann Institute of Science in Rehovot, Israel, together with Danish, Spanish, French and Berlin colleagues, has now investigated this process in infected blood cells for the first time. The blood cells were infected with the malaria pathogen Plasmodium falciparum and then mixed with different concentrations of bromoquine from the quinoline family.

Malaria pathogens in blood cells can only be examined in vivo and in their natural environment using X-ray microscopy at synchrotron sources. Other investigation methods, such as electron microscopy, require the pathogens to be dried and cut into ultra-thin slices.

At BESSY II, Stephan Werner and Peter Guttmann together with Sergey Kapishnikov were able to examine the samples using X-ray microscopy. ”The blood samples are flash-frozen for the examination so that we can observe the pathogens in vivo and also produce three-dimensional X-ray tomography images”, explains Guttmann. Further X-ray microscopy studies were carried out at the ALBA synchrotron light source in Barcelona.

Fluorescence spectromicroscopy at the European Synchrotron Radiation Facility ESRF in Grenoble made it possible to map the distribution of elements in blood cells . When combined with the cellular structure revealed by the three-dimensional X-ray images, the bromoquine distribution and its mode of action could be precisely interpreted. ”We see in our images that the bromoquine accumulates at the surface of hemozoin crystals. This should lead to inhibition of the crystal growth and thus disrupt the detoxification process by the plasmodia parasites”, explains Kapishnikov.

These investigations can also be extended to other drug groups such as Artemisinin and provide valuable information for the design of more effective malaria treatments.

More about Weizmann Institute of Science