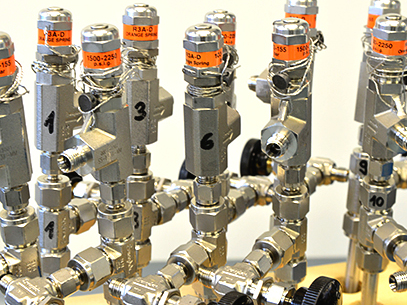 Reactors used for parallel screening of the effects of various pressures on formaldehyde synthesis.

Environmentally benign methods for the industrial production of chemicals are urgently needed. LMU researchers recently described such a procedure for the synthesis of formaldehyde, and have now improved it with the aid of machine learning.

Formaldehyde is one of the most important feedstocks employed in the chemical industry, and serves as the point of departure for the synthesis of many more complex chemical products. Industrial production of formaldehyde is currently based on a large-scale procedure which consumes fossil fuels and requires a high energy input. More efficient and more sustainable modes of synthesis are therefore urgently needed, which could make a significant contribution to the mitigation of climate. LMU chemist Professor Oliver Trapp and his colleagues have now developed a new workflow for the production of formaldehyde, which is based on an algorithm constructed with the aid of machine learning. The new procedure increases yields of the compound by a factor of 5, as the team now reports in the journal Chemical Science. The authors of the study are convinced that their novel approach has great potential and can in principle be applied to other synthetic procedures.

Industrial synthesis of formaldehyde begins with syngas [a mixture of carbon monoxide (CO) and molecular hydrogen (H2)] – to which methanol is added before being oxidized with the help of a catalyst. However, the production of syngas itself requires high temperatures and fossil fuels such as natural gas or coal. In a previous study, the LMU researchers described the development of a reaction scheme which allowed a formaldehyde derivative to be synthesized in a single step from a mixture of hydrogen gas and carbon dioxide, in the presence of a homogeneous catalyst, under moderate conditions of temperature and pressure. On addition of methanol, this derivative could then be converted into the desired end-product. The strategy has a number of advantages over the conventional procedure. “First of all, it allows CO2, which is a byproduct of several industrial processes (for example, in the production of steel) to be recycled. So this approach not only enhances the efficiency of formaldehyde synthesis, it also reduces the rate of accumulation of CO2 in the atmosphere. In the light of ongoing climate change, this is a much sought-after and very welcome side-effect of the procedure,” says Trapp. “In addition, the whole process requires far less energy than alternative routes of synthesis, as it occurs at lower temperatures and involves fewer steps.”

The group has now optimized this procedure by varying no less than seven parameters that affect the yield of formaldehyde synthesis in their system, and using machine learning to identify the parameter combinations that give the best results. The essential feature of machine-learning algorithms is that they are capable of learning from experience, when provided with appropriate ‘training’ datasets. “In the method that we employed, called random forest, the initial datasets contain valid results obtained on the basis of empirical observations or calculations,” says Trapp. A subset of these data is used to train the algorithm, so that it can construct a mathematical relationship between these input data and the corresponding results. So the outcome of this step is a mathematical model. The model’s ability to account for the rest of the data can then evaluated, and the model can be progressively tuned.

Using this method, the LMU team was able to determine the optimal reaction conditions for their chemical system. By appropriately tuning the input parameters in a new reaction setup, they were able to test the efficacy of the algorithm directly. “The new reaction scheme increased the efficiency of synthesis by 500% relative to that of the conventional mode of formaldehyde production,” says Trapp. “This result significantly exceeded our expectations, and it demonstrates the potential of modern algorithms to maximize outcomes with minimal practical effort.”

The authors are confident that their results will motivate chemical engineers to adopt the process and implement it on a technical scale. “BASF, our partner in the project, is already engaged in assessing the industrial relevance of the process,” says Trapp. Given that annual global production of formaldehyde exceeds 20 million tons by a considerable margin, and demand for the compound continues to rise, this comparatively benign alternative to the current mode of synthesis could make an appreciable contribution to the reduction of greenhouse gases.