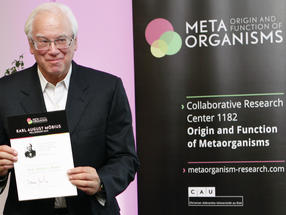 Tuesday, November 12, the Collaborative Research Centre (CRC) 1182 "Origin and Function of Metaorganisms" at Kiel University awarded its most important science prize, the Karl August Möbius-Fellowship, for the third time. This year's winner is the American physician and microbiologist Professor Martin J. Blaser from Rutgers University in New Jersey. Blaser, who was voted one of the 100 most influential people of 2015 by the US news magazine "Time", will receive the 10,000 Euro award for his lifetime achievement and the associated special merits for a better understanding of how microbial colonization of the body is related to human health. A core thesis of his work is that the loss of microbial diversity is one of the main causes of many modern diseases of civilization. Blaser is currently working with international partners, including the Kiel University, to establish a novel global storage facility to preserve microbial diversity. The aim of this initiative is to preserve as broad a spectrum of bacterial species and other microorganisms as possible and thus potentially the key to the cure of serious diseases.

'Missing microbes' and the preservation of microbial diversity

Martin Blaser, who heads the Center for Advanced Biotechnology and Medicine (CABM) at Rutgers University, is considered one of the world's most influential scientists in the field of human microbial research. A central result of his research into the relationships between the human body and the microorganisms living on and in it is the description of the decline in microbial biodiversity: In recent decades, the composition of the human microbiome has become increasingly species-poor and less diverse. In these microorganisms, which have been lost, for example, due to the intensive worldwide use of antibiotics or the hygiene standards of Western lifestyles, Blaser sees one of the main causes for the sharp increase in so-called environmental diseases.

"These missing microbes could provide the key to treating and curing civilization-related diseases such as diabetes, Crohn's disease, and chronic inflammatory diseases in the future," explains Professor Thomas Bosch, speaker of the SFB 1182. An important goal for biological and medical research is therefore to safeguard microbial diversity as a whole and preserve it for the future. "Blaser's pioneering work on the importance of lost microbes is of central importance for the research field of the SFB 1182. It makes him a deserving recipient of our Möbius Prize in an exemplary manner," Bosch continued.

In order to cope with the problematic decline of microbial diversity and come closer to its permanent conservation in the future, Blaser has launched a global initiative together with Professor Maria Gloria Dominguez-Bello, also from Rutgers University, and international partner institutions: With the so-called 'Microbiota Vault' they want to create a technical facility that will enable the permanent storage and conservation of as many microorganisms as possible that could potentially be important for human health.

In principle, the project is comparable to the well-known 'Global Seed Vault' in Spitsbergen, Norway, which aims to conserve global crop diversity. In a storage system located in the Arctic, deep-frozen seeds of a large number of important crop species are stored there in a disaster-proof manner.

Following a similar principle, the members of the new 'Microbiota Vault' project, headed by Dominguez-Bello, want to freeze numerous species of microorganisms in the future and preserve them just as safely for the future. A technical feasibility study is currently underway, to which Kiel University is also contributing as part of the Kiel Life Science (KLS) priority research area. In a next step, the participating scientists, with the help of their international partner institutions, want to identify and collect important microbial species and communities. In particular, regions whose microbial diversity has not yet been impoverished by the effects of industrial lifestyles will play an important role. The actual implementation of the project is planned for next year.