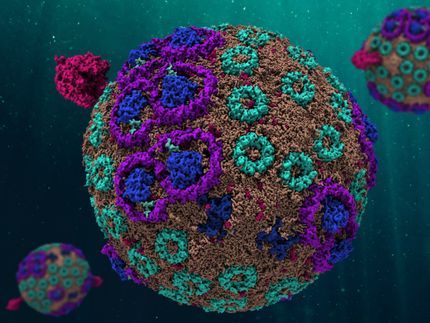 The model of the chromatophore is spherically round, scientists used computers with an enormous capacity to develop it. The simulation behaves in exactly the same way as its counterpart in nature.

The conversion of sunlight into chemical energy is essential for life. In one of the largest simulations of a biosystem worldwide, scientists have mimicked his complex process for a component of a bacterium - on the computer, atom by atom. The work, which has now been published in the journal "Cell", is an important step towards a better understanding of photosynthesis in some biological structures. Headed by the University of Illinois, a team from Jacobs University Bremen was also involved in the international research cooperation.

The project was initiated by the late German-American physics professor Klaus Schulten from the University of Illinois, who researched the understanding and representation of atomic interactions of living systems. His research group modelled the chromatophore, a light-absorbing part of a cell that releases chemical energy in the form of a molecule called ATP. These chromatophores are found in plant cells as well as in some bacteria.

"They act like a solar cell of the cell. With their antenna complexes, they absorb light and release energy in the form of ATP for all other cell activities," says Ulrich Kleinekathöfer. The professor of theoretical physics at Jacobs University worked on the project together with his doctoral student Ilaria Mallus. Based on the data of their American colleagues, they performed quantum mechanical calculations for the model.

To find out how this system works, the international research group dissected the chromatophore with every tool available to science, from laboratory experiments over atomic force microscopy to software innovations. All parts were reassembled in the 136 million atom model, which behaves like its counterpart in nature. This was only possible with the help of enormously powerful supercomputers. "Standard simulations work with about 100,000 atoms, this model is 1,000 times larger, it is an advance into new dimensions," says Kleinekathöfer

So far, researchers have usually only been able to simulate individual proteins. The model shows the interplay of very many proteins along the entire process chain, from light absorption to the production of ATP. "At some point, we will be able to simulate an entire bacterium or cell," believes Kleinekathöfer. "This is an important step towards this goal."