Synchro swimmers under the microscope 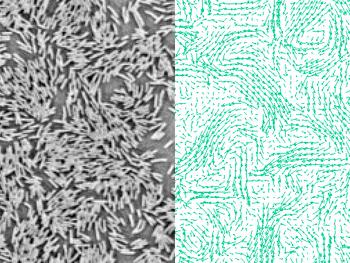 Collective motion in bacterial suspensions. At the right: Typical snapshot of the velocity field measured in a high-density cell suspension (Φc = 0.08, cell length L = 2µm, channel height h = 50µm). Chemotaxis assays were performed using a microfluidic device where two reservoirs with different chemical composition are connected by a channel in which the chemoattractant gradient forms. 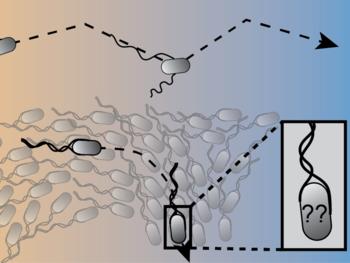 Not only birds, fish and even crowds of people show collective movement patterns, motile bacteria also form currents and vortices when their cell density exceeds a certain size. Researchers at the Max Planck Institute for terrestrial Microbiology in Marburg have now been able to show how swarm behaviour affects navigation in the environment.

Individual bacterial cells swim in relatively straight second-long runs interrupted by short reorientations (tumbles) to explore their environment. While swimming, the bacteria use a minimal sense of smell to measure changes in their chemical environment (e.g., concentrations of nutrients) and bias their swimming, prolonging the runs towards favorable conditions and shortening the ones in adverse directions, in order to stir their otherwise random motion towards better life conditions. The network of proteins that controls this so-called chemotactic behavior is one of the best studied biological signaling systems. A striking feature of this network is that it uses a chemically encoded memory to compare the current conditions to the one experienced a few seconds prior, and bases the decision to prolong or shorten runs on this comparison.

If the overall cell density reaches a certain point, fundamentally different dynamics are observed as jets and swirls of bacterial cells emerge and dissolve again. “Despite the frequent occurrence of collective motility, very little was known about how the physical interactions influence the chemotactic navigation of bacteria. This is the question we undertook to answer”, explains project leader Remy Colin.

This lack of knowledge is in part due to the technical difficulty of measuring the dynamics of cells in a dense suspension. “Fortunately, over the last few years, new image analysis methods have been developed or adapted to bacterial systems”, says Victor Sourjik, Head of the Department of Systems and Synthetic Biology. “This gives us the opportunity to exploit intensity fluctuations or intensity pattern shifts to characterize swimming and chemotaxis in populations of bacteria.”

To measure both the collective dynamics and the chemotactic response of populations of E. coli cells at varying density, the Max Planck researchers analyzed bacterial swimming in controlled gradients of a chemical attractant using microfluidics and these new image analysis methods.

The experimental results showed that, after increasing up to a maximum at intermediate densities, chemotaxis is strongly reduced as collective motion develops. Collective reorientations seem to interfere with the chemo-sensing mechanism. “As the cell is swimming, it monitors the change in chemoattractant concentration within a few seconds, to decide whether to tumble. If during this time the direction in which the cell swims has changed significantly, the decision becomes less relevant, thus making the biochemically hard-wired bacterial chemotaxis strategy inefficient,” Remy Colin explains. “When comparing the experimentally observed collective motion with numerical simulations, we realized that direct contact interactions between the bacteria were only secondary. In fact, the hydrodynamic interactions because of the surrounding fluid displacement play the primary role in the emergence of collective motion. This question had remained controversial among the physicists interested in collective behaviors.”

Density effects have wide consequences for bacterial populations in the wild

The regulation of chemotactic behavior through physical interactions among motile cells has several important consequences for bacterial high-density behaviors. First, it provides a physical mechanism that regulates chemotactic accumulation of bacteria near food sources, because gradually increasing cell density would initially promote and subsequently limit these processes.

This cap on the number of cells which can reach a given food source or cell patch should play an important role for resource distribution within bacterial populations, as well as their self-organization. Second, the fundamental undermining of chemotaxis is observed at cell densities typical of swarming, a type of dense swimming motility used by many bacteria to rapidly spread on surfaces, for example during an infection. This surprisingly suggests that chemotactic navigation within a swarm is nearly impossible without specific counteracting mechanisms that remain to be discovered.

Collective motion in bacterial suspensions. a, Typical snapshot of the velocity field measured in a high-density cell suspension (Φc = 0.08, cell length L = 2µm, channel height h = 50µm). Chemotaxis assays were performed using a microfluidic device where two reservoirs with different chemical composition are connected by a channel in which the chemoattractant gradient forms.