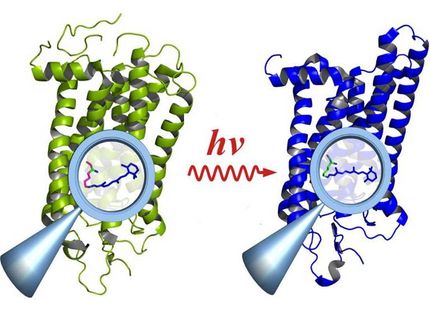 Rhodopsin before (left) and after activation by light (right): The activation causes changes in functional groups inside the molecule (magnifying glass), which affect the entire molecule.

A new method of infrared spectroscopy developed at BESSY II makes single-measurement observation and analysis of very fast as well as irreversible reaction mechanisms in molecules feasible for the first time. Previously, thousands of such reactions have had to be run and measured for this purpose. The research team has now used the new device to investigate how rhodopsin molecules change after activation by light – a process that is the basis of how we see.

Time-resolved infrared spectroscopy in the sub-millisecond range is an important method for studying the relationship between function and structure in biological molecules. However, the method only works if the reaction can be repeated many thousands of times. This is not the case for a large number of biological processes, though, because they often are based on very rapid and irreversible reactions, for example in vision. Individual light quanta entering the rods of the retina activate the rhodopsin protein molecules, which then decay after fulfilling their phototransduction function.

Now a team headed by Dr. Ulrich Schade (HZB) and Dr. Eglof Ritter (Humboldt-Universität zu Berlin) at the IRIS beamline of BESSY II has developed a new instrument that can detect these kinds of very fast and/or irreversible reactions with a single measurement. The time resolution is a few microseconds. The instrument, a Féry spectrometer, uses a highly sensitive detector known as a focal-plane detector array and special optics to make optimal use of the brilliant infrared radiation of the BESSY II synchrotron source. The team used this device to observe activation of rhodopsin under near-in vivo conditions for the first time.

Rhodopsin as a model case

“We used rhodopsin because it irreversibly decays after being excited by light and is therefore a real acid test for the system”, explains Ritter, first author of the study. Rhodopsin is a protein molecule that acts as a receptor and is the vision pigment found in the rods of the eye's retina. Even single photons can activate rhodopsin – enabling the eye to perceive extremely low levels of light. Moreover, rhodopsin is the common element in a class of receptors with hundreds of members that are responsible for olfaction, taste, pressure sensation, hormone reception, etc. – all of which function in a similar manner.

The team also studied another exciting protein in the infrared range for the first time: actinorhodopsin. This molecule is able to convert light energy into an electric current – a property that some bacteria use to generate electrochemical energy for their metabolisms.

“The new method enables us to investigate the molecular reaction mechanisms of all irreversible processes (or slow cyclic processes), such as those in the field of energy conversion and storage, for example”, emphasised Schade, who heads the IRIS team.