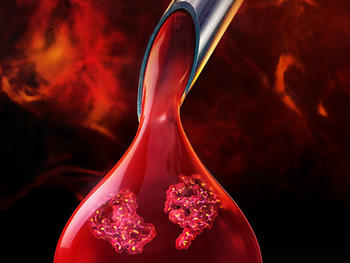 Developing new medicines and understanding how they target specific organs often gives a crucial advantage in the fight against human diseases. An international team led by researchers at the European Molecular Biology Laboratory and Cellzome, a GSK company, has developed a technology to systematically identify drug targets in living animals. In their results, published in Nature Biotechnology on 20 January, the scientists mapped protein–drug interactions in rat organs and blood. Their research opens pathways in drug discovery, fundamental biology, and personalised medicine.

When a drug binds to a protein, the structure of the protein gets tighter and only unfolds at higher temperatures. In this study, Mikhail Savitski – team leader and head of the Proteomics Core Facility at EMBL Heidelberg – and his team, together with a team at Cellzome melted proteins to observe their properties. They were able to get insights into the interactions between multiple proteins, or between proteins and drugs.

"For the first time, we can systematically map drug–protein interactions in a mammalian organism. This global view of the drug targets and potential side-effects is a huge step in drug discovery," explains Mikhail Savitski. By comparing the unwinding temperatures of proteins, the researchers determined which drug connected with which protein.

In 2014, Savitski and Cellzome presented their new thermal profiling technique for the first time, allowing scientists to study cell cultures with heat.  While this technology advanced the field, cultured cells differ strongly to a living organism.

The method now published represents a significant advancement for translational research because biological changes can be directly monitored in an organ by measuring protein interactions and activation of cellular pathways. In drug discovery, the ability to monitor the engagement of the pharmacological target in a living organism is fundamental for achieving therapeutic efficacy.

To demonstrate their technique's capabilities, the scientists scanned all proteins in rat liver, lung, kidney, and spleen. Their results provided novel insights into the interactions of proteins and revealed potential drug targets. "For the first time, we can study protein interactions in different tissues of living organisms and how they are affected by external conditions. Our technique could significantly improve our understanding of human diseases and aid the development of successful treatments," says Nils Kurzawa, EMBL scientist in the Savitski group.