From 2D crystal to 1D wire

Unexpected behaviour of the material 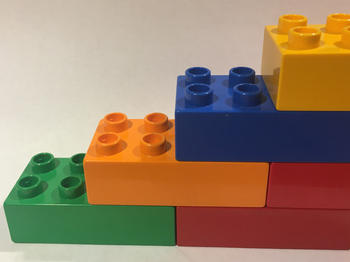 Careful polishing produces even steps with a height of exactly one atom – as in the attempt to build a slanted plane using only Lego bricks of the same size.

No volume, not even a surface: a one-dimensional material is like a wire and has properties that are completely different to its 3D counterpart. Physicists at the University of Duisburg-Essen (UDE) have now discovered a system that, at warmer temperatures, forms self-organized wires consisting of only one row of individual atoms.

"Low-dimensional systems are en vogue", according to Professor Michael Horn-von Hoegen, experimental physicist in the UDE Collaborative Research Centre 1242 "Non-Equilibrium Dynamics of Condensed Matter in the Time Domain". For restricting a system of three dimensions to just one creates the possibility of discovering new properties in the material.

Therefore, the scientists used stepped surfaces to allow atomic wires to form in a self-organized way by cutting a silicon crystal at an angle of 12 degrees. Careful polishing produces even steps with a height of exactly one atom – as in the attempt to build a slanted plane using only Lego bricks of the same size. The edges of the steps are formed by silicon atoms, with two rows of gold atoms deposited behind them.

The researchers are now interested in every third silicon atom in this row at the edge, because it has special properties: At very low temperatures, these atoms are arranged in a regular lattice (viewed across the steps), i.e. in a two-dimensional crystal structure. And now heat is added, a term that is quite elastic in physics: from previously -223°C, the system is now heated to around -123°C. This thermal energy causes the regular distances between the special silicon atoms to break up. They are now sometimes two, sometimes four atoms apart.

This way, independent chains of atoms are formed, which run along the edges of the steps. The fact that physicists can explain this phenomenon in detail today is due in large part to the theorist Prof. Björn Sothmann: His calculations explained what the pure experiment could not reveal.

"Here, something new emerges almost out of nowhere," Horn-von Hoegen summarises. And the result also contradicts previous expectations: "2D order at low temperatures, one-dimensional structures when it gets warmer; you don't get this kind of thing from any other material. Now we want to find out whether this also applies to other systems – maybe even at room temperature".