Possible correlation between success of cancer therapy and intestinal microbes 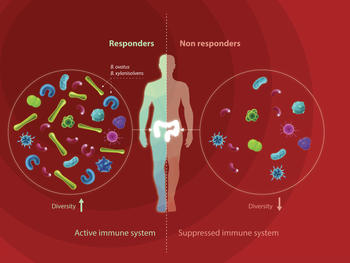 Schematic illustration of possible correlations between gut microbiome and diseases.

Cancer patients respond differently to therapies. The success of the classical treatment methods possibly depends on the composition of the microbiome in the gut. Study results obtained by researchers from Jena and Hong Kong point to that. For their study they investigated eight different types of cancer.

Around one out of six deaths worldwide is related to cancer. The best known treatment methods include chemotherapy and immunotherapy. These therapies work by inhibiting the further division of cancer cells or by supporting the immune system in killing the tumour cells. However, despite today's well-developed anti-cancer therapies, their efficiency is not as high as desired.

"All data indicate that the intestinal microbiome plays an important role in therapeutic success. So all the microorganisms living in our gut can somehow influence the outcome of therapeutic measures in cancer treatment," says Gianni Panagiotou from the Leibniz Institute for Natural Product Research and Infection Biology in Jena. Together with his team he analysed stool samples of a group of 26 cancer patients treated with chemotherapy or a  combination of chemotherapy and immunotherapy. The experimental group was small but consisted of patients with eight different types of cancer. The researchers were able to identify some common features in the stool analysis: "The intestinal microbiomes of those cancer patients who responded well to the therapy show a greater microbial diversity. In addition, the bacterial species found in their intestine differ from those of patients who responded less well to therapy," says Panagiotou. According to the scientists, the species Bacteroides ovatus and Bacteroides xylanisolvens have a positive effect on the course of therapy, whereas Clostridium symbiosum and Ruminococcus gnavus were found in  a higher amount in the of patients whose anti-cancer therapy was less successful.

With the help of these findings, Panagiotou and his team have developed a prediction model based on machine learning. In the long term, this model could make it possible to calculate the probability of successful anti-cancer treatment before therapy begins, regardless of the type of cancer. After entering the data already collected into the model, the scientists tested the accuracy of the predictions using a control group. In this test, the model proved to be highly accurate. "However, our control group was not very large. So our next task is to confirm the previous results with a larger number of comparison data," says Panagiotou. Together with his colleagues in the Jena Cluster of Excellence “Balance of the Microverse”, he is investigating the mechanisms by which microbiomes interact with their environment.