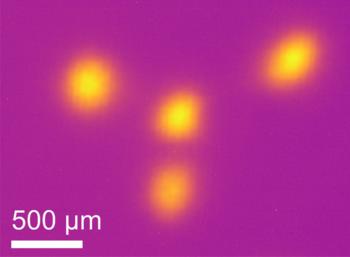 This picture shows an X-ray image of the electron beam in TRIB-mode where two orbits co-exist: the regular orbit and the second one winding around it closing only after three revolutions.

At the BESSY II storage ring, a joint team of accelerator physicists, undulator experts and experimenters has shown how the helicity of circularly polarized synchrotron radiation can be switched faster - up to a million times faster than before. They used an elliptical double-undulator developed at HZB and operated the storage ring in the so-called two-orbit mode. This is a special mode of operation that was only recently developed at BESSY II and provides the basis for fast switching. The ultra-fast change of light helicity is particularly interesting to observe processes in magnetic materials and has long been expected by a large user community.

In synchrotron radiation sources such as BESSY II, electron bunches orbit the storage ring at almost the speed of light. They are forced to emit extremely bright light pulses with special properties by periodic magnetic structures (undulators).

Since the 1980s, this has been exploited in so-called XMCD (X-ray Circular Dichroism) experiments to investigate static and dynamic changes in magnetic materials or to image magnetic nanostructures on surfaces.

Especially for such imaging techniques, the user community at synchrotron radiation sources has long wished for the possibility to quickly switch the helicity of the light, mainly because this directly results in a magnetic image contrast that makes bits in magnetic data storage devices visible and quantifiable.

In the elliptical undulators typical for BESSY II (APPLE II), developed by the group around Johannes Bahrdt, the helicity of light is switched by a mechanical displacement of meter-long arrangements of strong permanent magnets, a process that sometimes takes up to minutes.

The new method, however, is based on the combination of such undulators with a special orbit of the electron beam in the storage ring - generated by the so-called TRIBs (transverse resonance island buckets). TRIBs have been experimentally explored by the accelerator expert Dr. Paul Goslawski at BESSY II. While the path of the electrons in the storage ring normally closes after one orbit, in the TRIBs mode the electrons run on different orbits during successive orbits and can thus emit X-ray pulses from different magnetic field configurations, suggested Dr. Karsten Holldack and Dr. Johannes Bahrdt.

They were recently able to show that their idea actually works with the help of the existing double undulator UE56-2 at BESSY II in a pilot experiment: When passing through a specially prepared magnet arrangement of this double undulator, the electron bunches from different orbits in TRIBs mode emitted X-ray photons with the same wavelength but opposite circular polarization.

Switching a million times per second

Thus, in principle, XMCD signals from magnetic samples can now be studied at intervals of only 1 microsecond with right- and then left-circularly polarized light pulses. In the pilot experiment the XMCD signals from a magnetic sample (nickel in permalloy) were detected from revolution to revolution and the fast (MHz) helicity change could be clearly demonstrated. With new undulators tailored for this purpose, special beamlines with ultrafast helicity change could be offered at BESSY II in TRIBs mode. Ultimately switching times could shrink to nanoseconds.

”We are really delighted that the Two-Orbit / TRIBs development allows now already new experiments at BESSY II”, Goslawski says. This would also be an attractive option for BESSY III.