Repair instead of renew: damaged powerhouses of cells have their own ‘workshop mode’ 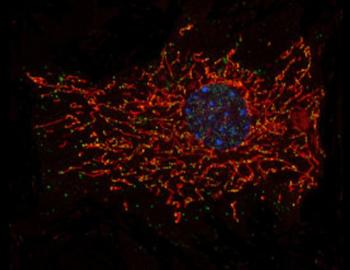 If the energy supply of a cell is disturbed by damage, it can protect itself from functional losses and repair itself in a kind of workshop mode. That is the result of a new study conducted by molecular biologist Professor Dr. Aleksandra Trifunovic and Dr. Karolina Szcepanowska as a leading scientist in her team, at the CECAD Cluster of Excellence in Aging Research at the University of Cologne.

Trifunovic works on so-called mitochondria, the powerhouses of every cell. The tasks of mitochondria include very basic processes such as the constant energy supply of the cell. The power machinery in mitochondria consists of five components, the so-called complexes I–V. In them, the food we eat is ultimately converted into energy for the cell. If the cellular energy supply is no longer guaranteed due to disturbances in signalling processes, this has serious consequences for the entire organism, and can cause diseases.

‘In our most recent work, we have discovered a rescue route that enables cells to repair damage of a particularly sensitive part of complex I’, said Trifunovic. ‘Repairing something is a far more energy-efficient self-help mechanism compared to the effort that would be required to completely destroy and rebuild this entire complex.’

The specific rescue route Trifunovic identified also acts as a safety valve for the cell. If the rescue route becomes active, the dysfunctional component quickly switches to a shutdown mode and ‘goes to the workshop’. This way, the cells prevent harmful reactive oxygen species from being produced and released in the powerhouse engine. Trifunovic remarked: ‘So far, very little is known about how this machinery is maintained and regulated. Our results shed light on this process and allow us to explore further therapeutic possibilities.’

As a molecular biologist, Trifunovic is already developing further research questions. In addition to the general novelty of the entire mechanism, she was particularly surprised to see that it is often better for the organism to keep some powerhouse machine components running despite damage, and not to put all damaged components into ‘workshop mode’ at the same time or to dismantle them completely. It is possible that functions of individual components, which go beyond energy supply, also play a role. Trifunovic would like to further investigate the scope and versatility of the molecular repair pathway she discovered in order to identify its full potential for possible therapies.

Trifunovic insisted that this study would not be possible without work of Dr. Karolina Szczepanowska, who was a driving force behind this project, and important collaboration with groups from our and other universities.