Using alveolar epithelia as a model for corona infection 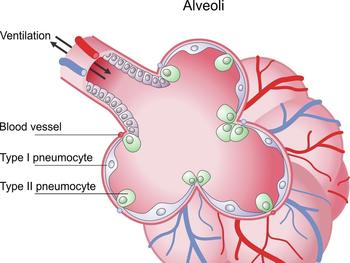 Illustration of alveoles. The Sars-CoV-2-Virus can attach on type II pneumocytes

Before new drugs can be administered to people, researchers first have to investigate their effects using cell cultures and animal testing. Human cell cultures are increasingly being used as a model system for this purpose. At the Max Planck Institute for Infection Biology in Berlin, a research team led by Director Thomas F Meyer has developed a model of the human lung epithelium on which to test compounds to combat the SARS-CoV-2 coronavirus.

Meyer began culturing organ-like structures – referred to as spheroids - in his laboratory in the mid-1990s, at what was then the Max Planck Institute for Biology in Tübingen. Together with surgical colleagues from the Tübingen University Clinic, Meyer created organoids from gastrointestinal epithelial tissues. At that time, the cultures were still very short-lived; since then, Meyer and his colleagues have improved their methods of cell cultivation to the point where the organoids can be kept alive almost indefinitely. The researchers currently work with epithelial organoids of the fallopian tube, cervix, prostate, gall bladder and lung.

Epithelial cells from the lung are a particular challenge, as they have the potential to differentiate into different cell types, including type I and type II pneumocytes. The primary cell cultures are developed from distal human airway epithelial cells of the lower respiratory tract, which then develop into the cells, which form the surface of the lung’s air-sacs - the alveolar epithelial cells.

The type II pneumocytes produce crucial proteins, which reduce the surface tension of the alveoli, preventing them from collapsing. Type I pneumocytes in contrast are thin, flat cells which allow for gas exchange between the alveolus and the surrounding blood capillaries. SARS-CoV-2 virus is able to attach to and infect the alveolar pneumocytes.

Thomas Meyer’s quasi-immortal lung epithelial cells therefore present a good model system for the researchers to test the effects of antiviral drugs and other inhibitors to combat the new virus. The researchers have previously used the epithelial cells to investigate influenza viruses. A feature of these primary human epithelial cells, which has particular importance for Covid-19 research, is their ACE-2 receptor, which SARS-CoV-2 uses as an entry portal. An additional advantage is that, in contrast to most other commonly used cells, these are healthy cells which - unlike tumour cell lines - give an authentic reflection of treatment with antiviral substances. This could enable rapid identification of urgently needed drugs that could be repurposed from their original medicinal use in the fight against Covid-19.