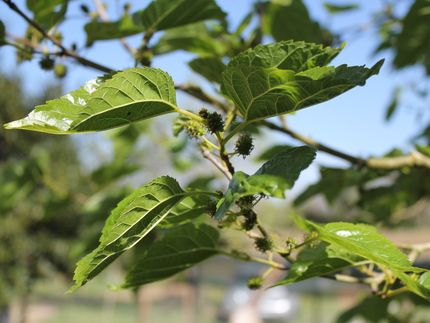 Substances contained in the root bark of the mulberry tree show a dual effect. They inhibit both viral and bacterial pathogens that infect the lungs.

Many organisms have to defend themselves against predators, diseases or pests. Their metabolic products constitute a chemical arsenal that has been used for medical purposes since time immemorial. Using state-of-the-art methods, a team led by Judith Rollinger is screening traditional knowledge in order to identify new active substances against lung infections caused by influenza, coronavirus or pneumococci.

Viral and bacterial infections have plagued human beings since time began. Even if they were not able to recognize the tiny pathogens, our ancestors used to relieve symptoms such as a cough, fever or respiratory problems with natural remedies. In her search for potent antiviral agents pharmacist Judith Rollinger, head of the “Phytochemistry & Biodiscovery” research group at the University of Vienna, is tapping into the powers of nature − “the world’s best chemist” − as she points out. “We use the traditional knowledge handed down over several generations as a treasure trove of empirical experience that helps us in the pre-selection of potential suppliers of active ingredients.” One survival strategy of plants and other organisms is to use their own metabolic products to ward off pests, predators and diseases. In the search for new drugs, it is necessary to harness this chemical arsenal in a targeted manner, explains Rollinger.

Rigorous selection in vitro and in silico

With the support of the Austrian Science Fund FWF, the team of principal investigator Judith Rollinger has used modern methods to search for new active ingredients found in nature. With the help of established research collaborations, chemoinformatics methods and cell cultures, the researchers shortlisted promising candidates. “Antiviral drugs are not easy to develop because viruses use human host cells to reproduce and spread. In order to discover substances whose mechanism of action we don’t yet know, we have carried out multi-track analyses,” explains Rollinger.

Initially, the team vetted up to 2,000 year-old written sources from ancient Greece, but also from traditional Chinese and European medicine and works of folk medicine in a search for typical symptoms. In 160 cases, they were able to establish an unequivocal connection between the reported healing effect and a given plant, fungus, lichen or moss and collect the biological material. The team then recorded the candidates in a database and produced extracts for each of them, which in turn may contain hundreds of chemical compounds.

In cooperation with Michaela Schmidtke from the Jena University Hospital, the natural extracts were pitted against various viruses that make their home in the respiratory system. The team observed in vitro how well the respective herbal substances could protect the infected lung epithelial cells from damage. The best 28 candidates were then placed in Petri dishes on cell cultures infected with respiratory pathogens, including drug-resistant strains of influenza virus. Their antiviral potential was compared with Tamiflu, an established influenza drug. Tamiflu is a so-called neuraminidase inhibitor to which some pathogens are already resistant. Tamiflu blocks the viral surface protein so that viruses that have already reproduced in the host cell cannot spread. “Once an extract proves to be active, we start a laborious phytochemical analysis. We investigate the composition and then isolate specific antiviral active compounds,” says Judith Rollinger.

Using approaches from chemoinformatics, the researchers identified possible new neuraminidase inhibitors that may defeat the drug-resistance. In collaboration with chemoinformatics experts from the Universities of Innsbruck and Hamburg, they modelled the 3D structure of the neuraminidase binding site and predicted compounds that could bind there and block the site. Judith Rollinger considers it a particularly successful outcome that the team was able to identify natural substances with dual effects in the course of the FWF-funded project.

These substances inhibit two pathogens responsible for lung infections: influenza viruses and pneumococci (Streptococcus pneumoniae). Ingredients from the root bark of the mulberry tree (Morus alba) inhibit both viral and bacterial neuraminidase. In a follow-up project funded by the Swiss Doerenkamp Foundation, clinical research will be continued on the most promising candidates. In a follow-up project in Vienna, the group now hopes to make the leap to the coronavirus. Like the influenza virus, coronavirus attacks the lungs severely and, given the ongoing pandemic, it is currently the focus of international research groups worldwide.