Lighting material of the future

Green luminescent substance is a hot candidate for producing OLEDs 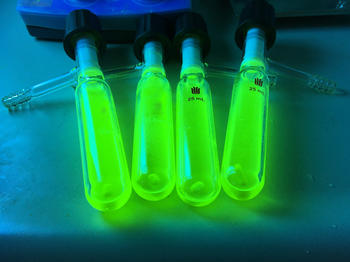 CuPCP gives off an intense green glow not only when current is applied, but also under UV light.

At the Paul Scherrer Institute PSI, researchers have gained insights into a promising material for organic light-emitting diodes (OLEDs). The substance enables high light yields and would be inexpensive to produce on a large scale - that means it is practically made for use in large-area room lighting. Researchers have been searching for such materials for a long time. The newly generated understanding will facilitate the rapid and cost-efficient development of new lighting appliances in the future.

The compound is a yellowish solid. If you dissolve it in a liquid or place a thin layer of it on an electrode and then apply an electric current, it gives off an intense green glow. The reason: The molecules absorb the energy supplied to them and gradually emit it again in the form of light. This process is called electroluminescence. Light-emitting diodes are based on this principle.

This green luminescent substance is a hot candidate for producing OLEDs, organic light-emitting diodes. For about three years now, OLEDs have been found in the displays of smartphones, for example. In the meantime, the first flexible television screens with these materials have also come onto the market.

In addition, OLEDs make cost-efficient room lighting with a large surface area possible. First, however, the materials best suited to this application need to be found. That's because many substances under consideration for OLEDs contain expensive materials such as iridium, and this impedes their application on a large scale and on extensive surfaces. Without such additives, the materials can actually emit only a small part of the energy supplied to them as light; the rest is lost, for example as vibrational energy.

The goal of current research is to find more efficient materials for cheaper and more environmentally friendly displays and large-area lighting. Here, inexpensive and readily available metals such as copper promise progress.

Researchers have now made a more precise examination of the copper-containing compound CuPCP. There are four copper atoms in the middle of each molecule, surrounded by carbon and phosphorus atoms. Copper is a relatively inexpensive metal, and the compound itself can be easily produced in large quantities - ideal preconditions for use over large extensive surfaces.

"We wanted to understand what the excited state of the compound looks like," says Grigory Smolentsev, a physicist in the operando spectroscopy research group. That is: How does the substance change when it absorbs energy? For example, does the structure of the molecule change? How is the charge distributed over the individual atoms after excitation? "This reveals how high the losses of energy that will not be released as light are likely to be," added Smolentsev, "and it shows us how we can possibly minimise these losses."

Using two large research facilities at PSI - the Swiss Light Source SLS and the X-ray free-electron laser SwissFEL - as well as the European Synchrotron Radiation Facility in Grenoble, France, Smolentsev and his collaborators took a closer look at the short-lived excited states of the copper compound.

The measurements confirmed that the substance is a good candidate for OLEDs due to its chemical structure. The compound's quantum chemical properties make it possible to achieve a high light yield. One reason for this is that the molecule is relatively stiff, and its 3D structure changes only slightly when excited. Now researchers can start to further optimise this substance for use in OLEDs.

Tools for the future

What's more, the measurements at the three large research facilities ? at PSI and in Grenoble ? were significant not only for the investigation of this one copper-containing compound. There was more at stake: The experimental data obtained this way are also helpful in improving theoretical calculations regarding molecules in general. "So in the future it will be possible to better predict which compounds are more suitable for OLEDs and which less," says Grigory Smolentsev. "The measurement data will help the chemists understand which part of the molecule stands in the way of high efficiency. And of course: how the compound can be improved to increase its light output."