Water bacteria have a green thumb 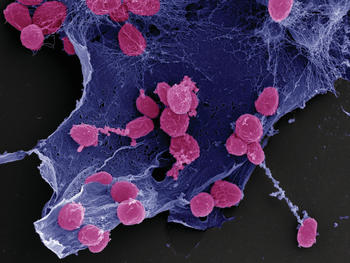 The sheer endless expanses of the oceans are hostile deserts — at least from the perspective of a bacterium living in water. Tiny as it is, its chances of finding sufficient nutrients in the great mass of water would seem to be vanishingly small. However, as in other deserts, there are life-saving oases in the sea: for example, microorganisms find everything they need to live on the surfaces of aquatic plants and algae. Here, very different species can grow within the community of a biofilm, as it is called, where they exchange information and offer each other protection.

Jena microbiologists working with Prof. Christian Jogler have now discovered natural products in a newly discovered species of bacteria, with the help of which the microorganisms living in the water control the composition of such biofilms and cultivate them like a garden, in line with their own needs.

The bacterium Stieleria maiorica is one of nearly 80 newly discovered species of bacteria, which the team from the University of Jena has been cultivating from fresh and saltwater samples from all over Europe and the USA, obtained in a large-scale collection. Stieleria maiorica is a member of the planctomycetes and was fished out of the Mediterranean Sea off the coast of Majorca. The researchers are particularly interested in such planctomycetes because they suspect that they contain bioactive natural products. And rightly so, as the Jena scientists have shown in their latest paper. Stieleria maiorica, for instance, produces a previously unknown group of chemical compounds, which were named “stieleriacine”, after the bacterium.

“These are relatively small molecules, which are structurally similar to a group of known signal molecules that microorganisms use to communicate with each other,” says Christian Jogler. “This led to the assumption that the newly discovered stieleriacines also act as signalling molecules in the broadest sense,” adds Jogler, who is Professor for Microbial Interactions at the University of Jena.

“This is a crucial advantage for the planctomycetes,” says Prof. Jogler. “They themselves are resistant to the antibiotic. Other species of bacteria, however, which compete with the planctomycetes in the biofilm, are inhibited by the antibiotic.” This gives the rather slow-growing planctomycetes the chance to compete with bacterial species which would otherwise have made things difficult for them. “One could say that planctomycetes use the Roseobacter for the ‘heavy manual work’ of adapting the composition of the biofilm to their own requirements and, like skilled gardeners, for regulating the growth of other species.”

However, for Prof. Jogler and his colleagues in the Cluster of Excellence “Balance of the Microverse” at Jena University, the planctomycetes are of interest not only as skilful underwater landscape gardeners.

“The chemical signalling substances that the microorganisms use to communicate and to influence their environment could also be of use in infection research,” says Jogler. If small molecules can be used to modulate the composition of biofilms, this could be used, for example, to prevent pathogenic microorganisms from settling on the surfaces of catheters or implants.

With the present study, the authors feel confirmed in their hypothesis that in the search for new active substances, and in particular for the new antibiotics that are so crucial, it is worth taking a look below the surface of the water. They are convinced that other natural substances with bioactive properties could still be found in the biofilms on aquatic plants and algae.