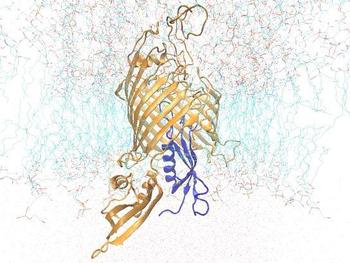 As humanity fights against the coronavirus, the battle against antibiotic resistant bacteria continues. Scientists at UCLouvain have succeeded in capturing unique images of protein soldiers that help bacteria resist drugs. The image recordings will make it possible to develop new attacks on bacteria and thus produce more effective antibiotics.

The resistance of bacteria to antibiotics is a major health problem. The problem? Bacteria acquire new defense mechanisms to counteract the action of drugs. For several years, the team of Jean-François Collet, professor at the de Duve Institute at UCLouvain, has been interested in this question, and in particular in bacteria surrounded by two membranes (or two surrounding walls). For a bacterium to survive, it must succeed in building its two surrounding walls and, once assembled, it must protect them from attacks by toxic molecules, including certain antibiotics. Indeed, if one of the walls is damaged, the bacterium dies.

In the outer perimeter wall, there is a particularly important type of guard tower. These towers, called BAM, are essential places for the surveillance, maintenance and protection of fortifications. Several discoveries, including by UCLouvain, have made BAM a prime target for the development of new antibiotics. However, despite the intense work of many university laboratories and pharmaceutical companies, the mode of operation of BAM remains poorly understood, which hinders the development of new antibacterial strategies.

UCLouvain scientists have caught BAM red-handed. The BAM guard towers are compulsory crossing points for all protein soldiers who stand guard on the ramparts as well as for certain protein soldiers who leave the bacterial fortification to patrol the surroundings. The UCLouvain scientists have achieved the feat of obtaining an instantaneous photograph (or three-dimensional structure), which makes it possible to observe BAM in the process of exporting one of the protein soldiers (RcsF) through the outer surrounding wall.

This UCLouvain discovery, published in the scientific journal Nature Chemical Biology, offers an unprecedented perspective: it provides precious information on the mechanism of bacteria and offers a new angle of attack to take over the BAM watchtowers during antibiotic treatment. In this sense, the discovery of the UCLouvain researchers contributes to the global effort to respond to this growing problem.