How to teach gold to tell left from right

Chemist from the TU Wien was awarded an Elise-Richter scholarship: She is conducting research in catalysis with ultra-small gold clusters 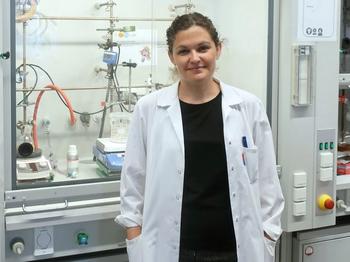 Nanometer-sized gold particles consisting of only a few atoms can be used as catalysts for important chemical reactions. Noelia Barrabés from the Institute of Materials Chemistry at TU Wien has been researching new methods of adapting and precisely controlling such tiny gold clusters for years. Now she has been awarded an Elise-Richter scholarship.

With this scholarship, she will now use gold clusters to solve a particularly difficult chemical problem: Some molecules exist in two different configurations, one being the mirror image of the other, with right and left side reversed. Normally, it is extremely difficult to produce only one of these two variants. Specially treated gold clusters are now supposed to help.

It is well known that gold can be used as a catalyst to initiate important chemical reactions. Gold can be used particularly efficiently as a catalyst if it is fixed in the form of tiny particles on a surface, as recently demonstrated in the journal ACS Catalysis. The size of the gold clusters plays an important role here. "Normally you have to deal with gold clusters of different sizes, which have different properties," explains Noelia Barrabés. "In our case it's different: we have developed methods to perfectly control the size of the gold clusters. All clusters consist of exactly the same number of atoms."

Different molecules can attach to these gold clusters. They are called ligands. "These ligands have a very decisive influence on the chemical behaviour of the gold clusters," says Noelia Barrabés. "We therefore had to develop methods to control the ligands precisely." For example, the gold clusters can first be produced in a liquid environment, then fixed on a solid surface, and finally their ligands can be exchanged. This technique was recently published in the journal Nanoscale and was also featured on the back cover of the magazine.

The molecule and its mirror image

As Noelia Barrabés recently demonstrated, this opens up a particularly interesting possibility: one can use so-called "chiral ligands", which also exist in image and mirror image variants.

"If you synthesize a molecule of which there is also a mirror-image version, you usually create both variants at the same time," explains Prof. Günther Rupprechter, head of the Institute of Materials Chemistry. "After all, both molecules consist of exactly the same atoms and have the same basic structure.”

As part of her Elise-Richter grant, Noelia Barrabés now wants to show that it is possible to selectively produce only one of the two variants using special ligands on the gold clusters. The special focus is on doing this with gold clusters fixed to a surface - a procedure that up until now has hardly been studied or used, but which would have great advantages over conventional methods if successfully implemented.

Especially for medical applications, the difference between a molecule and its mirror image can play an important role: "We know that our body reacts very differently to certain molecules than to the mirrored versions. In extreme cases, one version can heal and the other can cause illness," explains Noelia Barrabés.