Chemists develop a bioinspired strategy for the controlled synthesis of polyenes 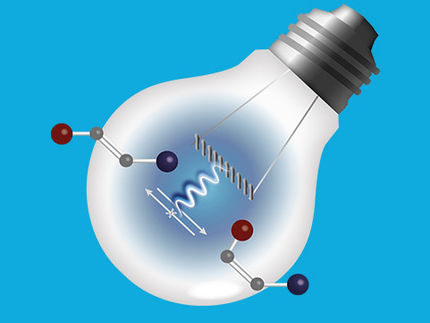 They occur in nature, are reactive and play a role in many biological processes: polyenes. It is no wonder that chemists have for a long time been interested in efficiently constructing these compounds – not least in order to be able to use them for future biomedical applications. However, such designs are currently neither simple nor inexpensive and present organic chemists with major challenges. Scientists at the University of Münster headed by Prof. Ryan Gilmour have now found a bio-inspired solution to the problem: They succeeded in constructing complex polyenes such as retinoic acid from simple, geometrically well-defined alkene building blocks. To do this, the scientists used small molecules as "antennas" which they excited with light, thereby enabling difficult chemical reactions to proceed via a process known as “Energy Transfer Catalysis”.

"The process provides us with a light-driven, operationally simple solution to a conundrum that has occupied us for a long time," says Dr. John J. Molloy, the first author of the study. The new possibility of forming complex polyenes could facilitate the exploration of these bioactive materials for drug discovery.

The alkenes used by the scientists are structural units that can exist in two non-equivalent geometrical forms. These so-called stereoisomers – i.e. compounds in which the bonding pattern is the same but which differ in the spatial arrangement of the atoms – are a valuable source of chemical information in biology and are common structural features in larger complex molecules such as retinal, a vitamin A derivative. Although, alkene geometry plays a pivotal role in function, e.g. regulating the mammalian visual cycle, strategies to access geometrically defined alkene building blocks for iterative synthesis are conspicuously underdeveloped. Although many methods exist to access each isomer independently, they are often plagued by poor selectivity or require laborious independent synthesis campaigns.

Since these materials are functionalised at both sites, they could be iteratively extended to construct complex bioactive polyenes such as retinoic acid, which may exist in multiple forms by virtue of alkene stereoisomerism. The Münster team demonstrated the power of their method in short, stereocontrolled syntheses of two retinoic acid-based drugs Isotretinoin and Alitretinoin.

The new method combines the importance of carbonyl chemistry in biosynthesis with the versatility of organoboron motifs in contemporary organic chemistry. “This article is dedicated to Prof. Duilio Arigoni, who recently passed away. He was a pioneer in bio-organic chemistry with whom I had the pleasure to work with in Zürich years ago and he often highlighted the urgency of this problem. This innovative solution is testimony to the hard work, innovation a dedication of a very talented group of highly motivated co-workers and I would like to take this opportunity to acknowledge them,” says Ryan Gilmour.