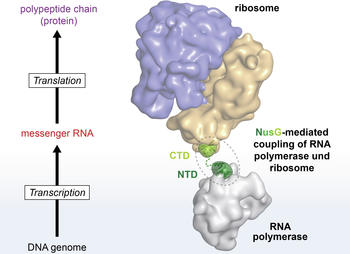 NusG couples transcription and translation. NusG binds to RNA polymerase via its NTD, and to the ribosome via its CTD. It thus serves as a flexible connection between the two machines.

Researchers of the University of Bayreuth and the Columbia University in New York reported groundbreaking findings on protein biosynthesis in bacteria in the journal "iScience". The small protein NusG links the two large molecular machines that work together during gene expression, which is the production of bacterial proteins based on genetic information: RNA polymerase and the ribosome. The molecular bridge enables the bacterial cell to synchronize perfectly the successive stages of gene expression, i.e. transcription and translation. Thus, this connection could be an excellent target for future antibiotic drugs.

In all living organisms, gene expression is a two-stage process: First, the genetic information stored in the DNA is used as template to synthesize ribonucleic acids, so-called messenger RNAs (mRNAs). By this, genetic information is converted into a form that can be directly used by the cell. RNA polymerase is responsible for this process, which is called transcription. During the process of translation the messenger-RNAs, in turn, are the molecular blueprints that are read by the ribosome and used for the production of corresponding proteins. In humans and animals, these two stages of gene expression are separated both spatially and biochemically. In a bacterial cell, in contrast, they are coupled as scientists have known for more than 50 years.

Ten years ago, a research group at the University of Bayreuth led by Prof. Dr. Paul Rösch reported in "Science” first indications that this coupling might actually be mediated by the protein NusG. Yet only now has the research group led by Dr. Stefan H. Knauer, in cooperation with partners at Columbia University, New York, succeeded in providing the first direct structural evidence. NusG consists of two flexibly connected domains: an amino-terminal domain (NTD) and a carboxy-terminal domain (CTD). The CTD binds to the ribosome, the NTD to RNA polymerase. Thus, NusG forms a flexible bridge between the central machines of gene expression, similar to the movable coupling between railway wagons. This connection causes transcription and translation to be synchronised. Key experiments clearly showing this link were performed with high-resolution nuclear magnetic resonance (NMR) spectroscopy and which were carried out at the North Bavarian Centre for High-Resolution NMR Spectroscopy at the University of Bayreuth.

"This opens up highly interesting perspectives for the development of new antibiotic agents. If we can disrupt this molecular bridge, bacterial protein synthesis and thus also reproduction of bacteria will be seriously impaired – most importantly, without affecting the human organism. We are targeting this approach in a current research project, and we have already achieved first promising results," says Dr. Stefan Knauer. "We were able to demonstrate the central role of NusG in bacterial protein biosynthesis by combining structural biology, biochemical, and molecular biology methods. We will continue this interdisciplinary approach in the search for efficient antibiotic substances", adds co-author Philipp Zuber M.Sc., who is doing his PhD thesis at the University of Bayreuth, where he also completed the elite study programme "Macromolecular Science" within the Elite Network of Bavaria.