In the future, MOFs could form the basis of programmable chemical molecules 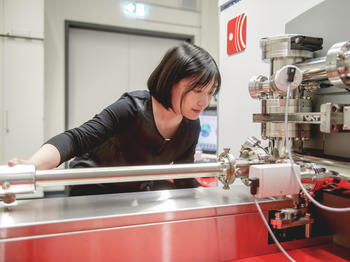 Tong Li is an expert for atom probe tomography.

In DNA, information is stored in the sequence of chemical building blocks; in computers, information consists of sequences of zeros and ones. Researchers want to transfer this concept to artificial molecules.

Artificial molecules could one day form the information unit of a new type of computer or be the basis for programmable substances. The information would be encoded in the spatial arrangement of the individual atoms – similar to how the sequence of base pairs determines the information content of DNA, or sequences of zeros and ones form the memory of computers. Researchers at the University of California in Berkeley and Ruhr-Universität Bochum (RUB) have taken a step towards this vision. They showed that atom probe tomography can be used to read a complex spatial arrangement of metal ions in multivariate metal-organic frameworks (MOFs).

Professor Tong Li, head of the Atomic-Scale Characterisation research group at the Institute for Materials at RUB, describes the method together with Dr. Zhe Ji and Professor Omar Yaghi from Berkeley in the journal “Science”, published online on 7 August 2020.

MOFs are crystalline porous networks of multi-metal nodes linked together by organic units to form a well-defined structure. To encode information using a sequence of metals, it is essential to be first able to read the metal arrangement. However, reading the arrangement was extremely challenging. Recently, the interest in characterizing metal sequences is growing because of the extensive information such multivariate structures would be able to offer.

Fundamentally, there was no method to read the metal sequence in MOFs. In the current study, the research team has successfully done so by using atom probe tomography (APT), in which the Bochum-based materials scientist Tong Li is an expert. The researchers chose MOF-74, made by the Yaghi group in 2005, as an object of interest. They designed the MOFs with mixed combinations of cobalt, cadmium, lead, and manganese, and then decrypted their spatial structure using APT.

Just as sophisticated as biology

In the future, MOFs could form the basis of programmable chemical molecules: for instance, an MOF could be programmed to introduce an active pharmaceutical ingredient into the body to target infected cells and then break down the active ingredient into harmless substances once it is no longer needed. They could also be used to capture CO2 and, at the same time, convert the CO2 into a useful raw material for the chemical industry.

“In the long term, such structures with programmed atomic sequences can completely change our way of thinking about material synthesis,” say the authors. “The synthetic world could reach a whole new level of precision and sophistication that has previously been reserved for biology.”