A topography of extremes

On the track of unconventional superconductivity, researchers are charting unknown territory 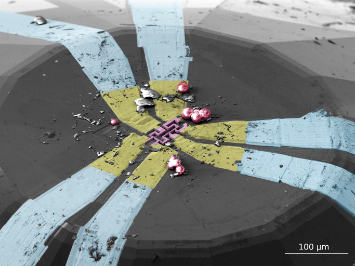 False-color electron microscopic image of a microstructure (violet) contacted via gold tracks (yellow) after reopening the diamond anvil cell. Ruby spheres (red) are used to sense the pressure in the sample chamber via laser fluorescence spectroscopy. Debris particles are remnants of the pressure medium and pressure device.

An international team of scientists from the Helmholtz-Zentrum Dresden-Rossendorf (HZDR), the Max Planck Institute for Chemical Physics of Solids, and colleagues from the USA and Switzerland have successfully combined various extreme experimental conditions in a completely unique way, revealing exciting insights into the mysterious conducting properties of the crystalline metal CeRhIn5. In the journal Nature Communications, they report on their exploration of previously uncharted regions of the phase diagram of this metal, which is considered a promising model system for understanding unconventional superconductors.

“First, we apply a thin layer of gold to a microscopically small single crystal. Then we use an ion beam to carve out tiny microstructures. At the ends of these structures, we attach ultra-thin platinum tapes to measure resistance along different directions under extremely high pressures, which we generate with a diamond anvil pressure cell. In addition, we apply very powerful magnetic fields to the sample at temperatures near absolute zero.”

To the average person, this may sound like an overzealous physicist’s whimsical fancy, but in fact, it is an actual description of the experimental work conducted by Dr. Toni Helm from HZDR’s High Magnetic Field Laboratory (HLD) and his colleagues from Tallahassee, Los Alamos, Lausanne and Dresden. Well, at least in part, because this description only hints at the many challenges involved in combining such extremes concurrently. This great effort is, of course, not an end in itself: the researchers are trying to get to the bottom of some fundamental questions of solid state physics.

The sample studied is cer-rhodium-indium-five (CeRhIn5), a metal with surprising properties that are not fully understood yet. Scientists describe it as an unconventional electrical conductor with extremely heavy charge carriers, in which, under certain conditions, electrical current can flow without losses. It is assumed that the key to this superconductivity lies in the metal’s magnetic properties. The central issues investigated by physicists working with such correlated electron systems include: How do heavy electrons organize collectively? How can this cause magnetism and superconductivity? And what is the relationship between these physical phenomena?

An expedition through the phase diagram

The physicists are particularly interested in the metal’s phase diagram, a kind of map whose coordinates are pressure, magnetic field strength, and temperature. If the map is to be meaningful, the scientists have to uncover as many locations as possible in this system of coordinates, just like a cartographer exploring unknown territory. In fact, the emerging diagram is not unlike the terrain of a landscape.

As they reduce temperature to almost four degrees above absolute zero, the physicists observe magnetic order in the metal sample. At this point, they have a number of options: They can cool the sample down even further and expose it to high pressures, forcing a transition into the superconducting state. If, on the other hand, they solely increase the external magnetic field to 600,000 times the strength of the earth’s magnetic field, the magnetic order is also suppressed; however, the material enters a state called “electronically nematic”.

This term is borrowed from the physics of liquid crystals, where it describes a certain spatial orientation of molecules with a long-range order over larger areas. The scientists assume that the electronically nematic state is closely linked to the phenomenon of unconventional superconductivity. The experimental environment at HLD provides optimum conditions for such a complex measurement project. The large magnets generate relatively long-lasting pulses and offer sufficient space for complex measurement methods under extreme conditions.

Experiments at the limit afford a glimpse of the future

The experiments have a few additional special characteristics. For example, working with high-pulsed magnetic fields creates eddy currents in the metallic parts of the experimental setup, which can generate unwanted heat. The scientists have therefore manufactured the central components from a special plastic material that suppresses this effect and functions reliably near absolute zero. Through the microfabrication by focused ion beams, they produce a sample geometry that guarantees a high-quality measurement signal.

“Microstructuring will become much more important in future experiments. That’s why we brought this technology into the laboratory right away,” says Toni Helm, adding: “So we now have ways to access and gradually penetrate into dimensions where quantum mechanical effects play a major role." He is also certain that the know-how he and his team have acquired will contribute to research on high-temperature superconductors or novel quantum technologies.