Novel approach to the storage of solar energy 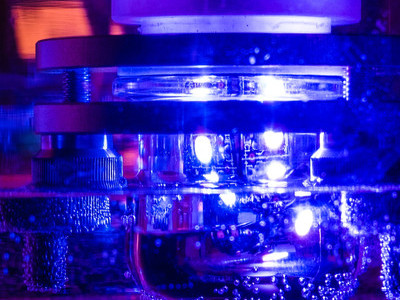 Photoreactor for the investigation of light-driven reactions, e.g. the photoreduction of copper(I) complexes

Using the energy from the sun as efficiently as nature does and converting it into chemical energy could drastically reduce global CO2 emissions. A research team from the Leibniz Institute of Photonic Technology (Leibniz IPHT) and the Friedrich Schiller University Jena has now come one step closer to this vision. The researchers have developed a chemical system that collects light energy and stores it on a molecule for at least 14 hours. Based on a copper complex, their system thus decouples photochemical processes from the day-night cycle — thus overcoming a barrier that previously made solar-powered photochemistry unsuitable for continuous industrial production processes.

Nature has already solved the problem: In photosynthesis, plants use sunlight to convert carbon dioxide into chemical compounds — in such a way that the solar energy stored in chemical bonds is also available when it is dark. Researchers are attempting to imitate this process using nature as a model; however, solar-driven photochemistry has so far only worked in bright light due to a lack of suitable storage facilities.

The research team from Leibniz IPHT and the University of Jena is now presenting a molecular approach to the storage of solar energy, which for the first time makes it possible to decouple photochemical reactions from the day-night cycle and allow them to take place independently of daylight. In contrast to previous approaches, which are based on solid state materials, the researchers generate reactive photoredox equivalents on a small molecule. This enables them not only to store the light energy for a previously unattained duration of at least 14 hours, but also to regenerate it when needed. The researchers published their results in the "Journal of the American Chemical Society".

"The dependence on brightness and darkness has so far been a major hurdle when it comes to using solar-powered photochemistry for continuous industrial production processes," explains main author Dr. Martin Schulz, who conducts research at the University of Jena and Leibniz IPHT. "We assume that our results will open up new possibilities to research systems for the conversion and storage of solar energy as well as for photo(redox)catalysis“.

In the chemical system developed by the Jena researchers within the Collaborative Research Center "CataLight", the photosensitizer and the charge storage unit are located on the same small molecule. This eliminates the need for intermolecular charge transfer between a separate sensitizer and a charge storage unit. The system retains three quarters of its charge capacity even after four cycles.

The researchers use a copper complex and thus a molecule based on a readily available metal, whereas previous approaches used rare and expensive precious metals such as ruthenium. The doubly reduced copper complex can be stored after photochemical charging and used as a reagent in dark reactions such as the reduction of oxygen.