Highly effective antibodies against the coronavirus were identified 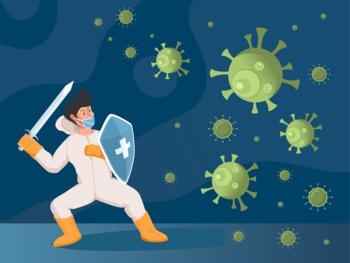 Researchers at the German Center for Neurodegenerative Diseases (DZNE) and Charité - Universitätsmedizin Berlin have identified highly effective antibodies against the coronavirus SARS-CoV-2 and are now pursuing the development of a passive vaccination. In this process, they have also discovered that some SARS-CoV-2 antibodies bind to tissue samples from various organs, which could potentially trigger undesired side effects.

Initially, the scientists isolated almost 600 different antibodies from the blood of individuals who had overcome COVID-19, the disease triggered by SARS-CoV-2. By means of laboratory tests, they were able to narrow this number down to a few antibodies that were particularly effective at binding to the virus. Next, they produced these antibodies artificially using cell cultures. The identified so-called neutralizing antibodies bind to the virus, as crystallographic analysis reveals, and thus prevent the pathogen from entering cells and reproducing. In addition, virus recognition by antibodies helps immune cells to eliminate the pathogen. Studies in hamsters – which, like humans, are susceptible to infection by SARS-CoV-2 – confirmed the high efficacy of the selected antibodies: “If the antibodies were given after an infection, the hamsters developed mild disease symptoms at most. If the antibodies were applied preventively - before infection - the animals did not get sick,” said Dr. Jakob Kreye, coordinator of the current research project. The DZNE scientist is one of the two first authors of the current publication.

Treating infectious diseases with antibodies has a long history. For COVID-19, this approach is also being investigated through the administration of plasma derived from the blood of recovered patients. With the plasma, antibodies of donors are transferred. “Ideally, the most effective antibody is produced in a controlled manner on an industrial scale and in constant quality. This is the goal we are pursuing,” said Dr. Momsen Reincke, also first author of the current publication.

“Three of our antibodies are particularly promising for clinical development,” explained Prof. Dr. Harald Prüss, a research group leader at the DZNE and also a senior physician at the Clinic for Neurology with Experimental Neurology at Charité - Universitätsmedizin Berlin. “Using these antibodies, we have started to develop a passive vaccination against SARS-CoV-2.” Such a project requires cooperation with industrial partners. That is why the scientists are collaborating with Miltenyi Biotec.

Kreye, Reincke, Prüss and colleagues usually deal with autoimmune diseases of the brain, in which antibodies erroneously attack neurons. “In the face of the COVID-19 pandemic, however, it was obvious to use our resources also in other ways,” said Prof. Prüss. For the current project, the researchers benefit from a project funded by the Helmholtz Association: the “BaoBab Innovation Lab”. Within this framework, they are developing and refining technologies for the characterization and production of antibodies, which they are now applying. “Now, we are working with our industrial partner to establish the conditions that will allow for the most effective large-scale production of the antibodies we have identified,” said Prüss. “The next step is clinical trials, that is testing in humans. However, this can not be expected before the end of this year at the earliest. The planning for this has already started.”

During their investigations, the researchers made a further discovery: some of the particularly effective antibodies against the coronavirus specifically attached to proteins of the brain, heart muscle and blood vessels. In tests with tissue samples from mice, several of the neutralizing antibodies exhibited such a cross-reactivity. Thus, they were excluded from the development of a passive vaccination. “These antibodies bind not only to the virus, but also to proteins in the body that have nothing to do with the virus. Future research is needed to analyse whether the associated tissues could potentially become targets of attacks by the own immune system,” said Prof. Prüss. Whether these laboratory findings are relevant for humans cannot be predicted at present. “On the one hand, we need to be vigilant in order to detect any autoimmune reactions that may occur in the context of COVID-19 and vaccinations at an early stage. On the other hand, these findings can contribute to ensure the development of an even safer vaccine,” the scientist said.

For the current studies, the DZNE research group lead by Prof. Prüss collaborated closely with the Department of Infectious Diseases and Respiratory Medicine at the Charité and the Institute of Virology at the Campus Charité Mitte. The Institutes of Virology and Veterinary Pathology at the Freie Universität Berlin and the Scripps Research Institute in the US were also significantly involved.