3D images display plant organs down to the smallest detail

Intelligent software for a better understanding of plant tissue development 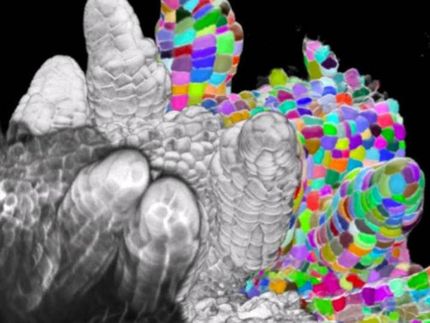 Microscopy provides imagery to the algorithm that then delineates the cellular structures, making the segmentation clearer.

Plant organs, such as the root, the shoot axis, the leaves, and the flowers, have a variety of tasks. They ensure that the plant can develop and grow, and that it can ensure the survival of its species by forming seeds. But how do plants shape their organs? How is genetic information used to build the three-dimensional form i.e. the shape of an organism?

Kay Schneitz, Professor of Plant Developmental Biology the Technical University of Munich (TUM), is concerned with the molecular basis of flower development and plant reproduction.  He is co-spokesman of a research group of the German Research Foundation (DFG-FOR 2581) that has been investigating how cells coordinate their behavior to give the plant a shape (morphogenesis).

In the past, researchers used primarily 2D technologies to analyze how a plant gets its shape.  “But morphogenesis naturally takes place in three-dimensional space as well as in the fourth dimension, time,” says Prof. Schneitz. “2D approaches, for example using tissue sections, therefore only allow partial insights into this process and, unfortunately, often produce incorrect results.”

Prof. Schneitz and his colleagues, the molecular biologists Athul Vijayan and Rachele Tofanelli, working together with colleagues from computer science and physics have now developed a new tool to solve this problem.

From computer code to a user-friendly graphic interface, researchers around the world now have access to open source software called PlantSeg, which enables the most accurate and versatile analysis of plant tissue development in 3D to date.

Machine learning - the software is trained

When researchers want to study the morphogenesis of tissues on the cellular level, it is necessary to image individual cells.  To do that, the cells must be separated from each other, in other words, “segmented” in order to analyze how they change over time.

“In plants, there are cells that look extremely regular, like rectangles or cylinders, in a cross-section,” says Anna Kreshuk, the senior author of a recent publication of the group’s research, “but you also have cells with “high lobeness” that is to say protrusions, which make them look more like puzzle pieces.  These are more difficult to segment because of their irregularities.”

To deal with this, the team utilized machine learning, a method from the field of artificial intelligence.  The scientists trained PlantSeg using 3D microscope images of reproductive organs and roots of the plant model arabidopsis thaliana, also known as thale cress.  From these images, the algorithm had to learn to identify inconsistencies in the sizes and shapes of cells.  It mastered this challenge so well that the software can now be used for practically all plant organs.

PlantSeg - a wide range of applications

PlantSeg not only enables studies of the development of plant organs with unprecedented precision, but also the analysis of tissue changes caused by pest infestation or environmental stress, such as heat.  The scientists hope that this will give them a better understanding of how plants react to environmental conditions.

This method could also be adapter for animal tissue.  “With animals, we would probably have to retrain parts of the software, but it would work,” states Kreshuk.  With such an adaptation of the software, the group will have created a tool of great significance beyond the plant world and with which, for example, disease-related tissue changes will be able to be analyzed much more precisely.