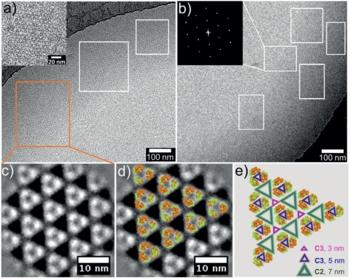 (a,b) Cryo-electron microscopy of the 2D-grating and the diffraction pattern of a section. (c-e) Magnification shows the 2D Pascal triangular pattern, with the inserted protein molecules.

A team from Helmholtz-Zentrum Berlin (HZB) used cryo electron microscopy to detect regular, two-dimensional structures in the form of Pascal triangles in a shock frozen protein material.  The samples have been synthesized by a Chinese research group. The method of cryo electron microscopy has the potential for new insights into energy materials as well.

Researchers often use electron microscopes to make the smallest structures visible. "In these, the sample is scanned in a vacuum with an electron beam," explains Dr. Zdravko Kochovski. The bioinformatician and physicist heads the cryo-electron microscopy laboratory in the Department of Electrochemical Energy Storage at HZB. One challenge is that the sample must not contain any water, so it must be prepared beforehand. This is particularly time-consuming for biological samples. If the water is replaced inside the cell, the cell can be changed or even damaged. In the worst case, this leads to misinterpretation of the measurement results - for example through artefacts.

Researchers such as Zdravko Kochovski are therefore taking a different approach and focusing on extreme cold. Their cryo-electron microscopes - derived from the Greek "kryos" for "cold" - work at temperatures around 150 degrees Celsius below zero. The advantage: it is not necessary to remove water from biological samples. Instead, they are "shock-frozen". Ice crystals that could damage the cell are not formed in this process - the water simply has no time for this. Experts call this process, in which your sample solidifies in an amorphous state, vitrification. "Ordinary window glass is probably the best known representative of such materials," the researcher explains. "But metals, semi-metals or organic compounds can also be converted into the amorphous state. This is the best way to make sensitive protein structures visible.

One molecular layer only

Guosong Chen and her team from The State Key Laboratory of Molecular Engineering of Polymers at Fudan University in Shanghai have produced such a vitrified sample. The professor of chemistry has succeeded for the very first time in combining protein molecules in such a way that they form a two-dimensional structure, i.e. only one molecular layer thick, in the form of a special pattern: the Pascal triangular lattice. Together with Kochovski, other researchers and Yan Lu, Professor of Chemistry and Head of the Department of Electrochemical Energy Storage at HZB, she has published this work in the journal "Angewandte Chemie".

For her research, Guosong Chen relies on a process known among experts as self-assembly. "Proteins assemble themselves into the most diverse structures all by themselves," explains Kochovski. This preferably results in self-similar structures. Like the Pascal triangle. This is a triangular pattern, which in turn consists of small triangles, in this case three protein molecules connect at the same angle. However, Pascal triangles are so complex that they were never produced in the laboratory before Guosong Chen.

Nature, on the other hand, often uses this construction method: as a capsid, for example, to package the genetic material of viruses; as a microtubule, to give cells a stable form; or as a pilus, with which bacteria can attach themselves to other cells or form biofilms. Knowing the structures and their origins broadens our understanding of the design principles of nature. But this does not only serve to satisfy scientific curiosity. It also opens up several possible applications. "Because with the necessary know-how, protein complexes can be assembled in the laboratory and one-dimensional nanowires, two-dimensional nanosheets or three-dimensional layer structures can be tailored," says Kochovski. "This biosynthesis has great potential. Because the nanostructured materials are not only biofunctional and biocompatible. We also have high expectations of their properties".

With structures made of nanowires or nanotubes, for example, electronics could break new ground. Assemblies based on enzymes could serve as catalysts for a wide variety of reactions. Or as transport containers, protein complexes could in future be used to transport active ingredients to the source of disease in the body. And researchers could draw inspiration for synthetic vaccines from natural virus structures.

Until now, Kochovski has concentrated on organic molecules. "This method can be used to study not only biopolymers but also viruses," says the scientist. "For example, colleagues from the University of Texas were the first to decode the structure of the SARS-CoV-2 virus. But this is by no means the end of the icy investigation method. "We have just expanded our field of research and are now also investigating inorganic energy materials with the cryo-EM," reports Kochovski. "We are certain that there is an extremely high potential in this to research these materials in their native state and thus ultimately to make regenerative energy production more efficient.