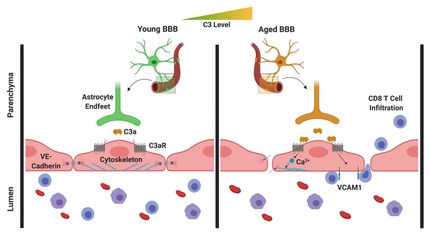 In the aging brain, C3/C3a production increases and the C3a receptors on vascular endothelial cells of the brain are activated. In response, these cells produce increased amounts of the adhesion molecule VCAM-1, which leads to an increased migration of lymphocytes into the brain. In addition, the activation of the C3a receptor leads to a mobilization of calcium ions in the cells, resulting in a disruption of the vascular endothelial cadherin, which is of central importance for the interconnection of these cells. Breaking these connections results in an increased permeability of the blood-brain barrier.

As a person becomes older, many structures and functions in the brain change. An important age-related change is the increased permeability of the blood-brain barrier, which normally only allows certain substances from the bloodstream into and out of the brain. Among other things, this may favor the development of neurodegenerative diseases such as Alzheimer's dementia. A series of previous studies suggests that the reduced function of the blood-brain barrier is linked to immunologically-related inflammatory processes – however, the exact mechanisms behind this are still hardly understood. In laboratory tests, Professor Jörg Köhl, board member of the Cluster of Excellence "Precision Medicine in Chronic Inflammation" (PMI) and director of the Kiel Institute for Systemic Inflammation Research (ISEF), University of Lübeck (UzL) and University Medical Center Schleswig-Holstein (UKSH), Campus Lübeck, together with the working group led by Professor Hui Zheng (Huffington Center on Aging, Houston, USA), have now identified a mechanism by which the so-called complement system, a specific part of the immune system, regulates the vascular inflammation and associated disturbed function of the blood-brain barrier during the aging process

The complement system is part of the innate immune system. It consists of more than 40 proteins, which are present in the blood and as receptors on the surface of cells. These proteins include the so-called complement factors and their cleavage products (protein fragments), as well as receptors that recognize these fragments. The system plays an important role in the defense against microorganisms. It signals the presence of pathogens as well as the binding of antibodies to pathogens, but also to the body's own structures. However, faulty regulation of the complement system may result in an excessive inflammatory response in the course of certain diseases, which causes tissue damage. While most of the complement proteins are produced in the liver, it has long been known that both complement factors as well as complement receptors are also independently produced directly in the brain. Of particular importance is the complement factor C3, which can be fragmented into two parts, C3b and C3a. C3a triggers its biological effect by binding with the C3a receptor, which is present on cells such as the vascular endothelial cells, i.e. the cells which form the inner lining of blood vessels, as well as various brain cells.

In the recently-published study, the researchers were able to show that C3/C3a production increases in the aging brain, and there is activation of the C3a receptor on vascular endothelial cells of the brain. In response, these cells increasingly produce a certain adhesion molecule, leading to an increased migration of lymphocytes (special immune cells) into the brain. In addition, the activation of the C3a receptor on the vascular endothelial cells induces the release of intracellular calcium ions. This leads to a disruption of a specific protein on the vascular endothelial cells, which is of primary importance for the binding of these cells. Breaking these bonds causes increased permeability of the blood-brain barrier. This means that the brain is no longer so well separated from the rest of the body, so that inflammations can also spread more easily from the environment to the brain.

In order to investigate this disease mechanism, the researchers developed a transgenic mouse model, in which the mice were genetically altered so that they no longer produce C3a receptors on the vascular endothelial cells. The specific elimination of the C3a receptor in vascular endothelial cells not only protected the mice against an increased permeability of the blood-brain barrier in old age, it also reduced the inflammatory activity of special immune cells in the brain, the microglia cells, and increased the volume of the hippocampus and cerebral cortex of aging mice, in comparison with mice with the C3a receptor. The hippocampus is of particular importance for learning and memory processes.

"Our findings show a new regulatory mechanism of the blood-brain barrier which is controlled by the complement system, and the associated immune cell activation, inflammation and degeneration in the aging brain," said Köhl. "The data suggests that the targeted blocking of individual elements of the complement system could lead to a significant improvement in the vascular function and reduce the permeability of the blood-brain barrier, and thereby a reduction in neuroinflammation and neurodegeneration in old age," added Köhl.

The observations could also be interesting for acute inflammatory conditions such as strokes and traumatic brain injuries or neurodegenerative diseases, in particular Alzheimer's, for which age is the biggest risk factor. "It is known from previous studies that the complement system is also highly activated in these diseases," explained Köhl.  "Thus, our findings could in future also enable new therapeutic approaches for these age-related diseases of the brain."