By screening hundreds of synthetic mini-antibodies called sybodies, a group of scientists has identified one that might stop SARS-CoV-2 from infecting human cells 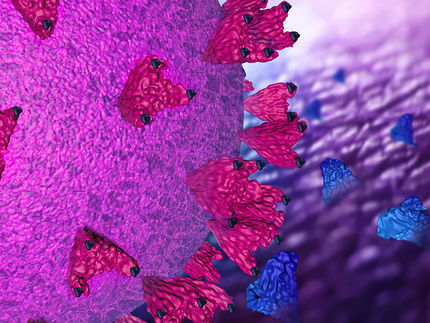 SARS-CoV-2’s ability to infect cells relies on interactions between the viral spike protein (magenta) and the protein ACE2 (blue), which is present on the surface of human cells. These interactions can be disrupted by sybodies (black) – synthetic mini-antibodies similar to those produced by camels and llamas.

The ability of SARS-CoV-2 to infect cells depends on interactions between the viral spike protein and the human cell surface protein ACE2. To enable the virus to hook onto the cell surface, the spike protein binds ACE2 using three finger-like protrusions, called the receptor binding domains (RBDs). Blocking the RBDs therefore has the potential to stop the virus from entering human cells. This can be done using antibodies.

Nanobodies, small antibodies found in camels and llamas, are promising as tools against viruses due to their high stability and small size. Although obtaining them from animals is time consuming, technological advances now allow for rapid selection of synthetic nanobodies, called sybodies. A technology platform to select sybodies from large synthetic libraries was recently developed in the lab of Markus Seeger at the University of Zurich, and made available for this study.

In search of the best sybody against SARS-CoV-2

EMBL Hamburg’s Christian Löw group searched through the existing libraries to find sybodies that could block SARS-CoV-2 from infecting human cells. First, they used the viral spike protein’s RBDs as bait to select those sybodies that bind to them. Next, they tested the selected sybodies according to their stability, effectiveness, and the precision of binding. Among the best binders, one called sybody 23 turned out to be particularly effective in blocking the RBDs.

To learn exactly how sybody 23 interacts with the viral RBDs, researchers in the group of Dmitri Svergun at EMBL Hamburg analysed the binding of sybody 23 to the RBDs by small-angle X-ray scattering. In addition, Martin Hällberg at CSSB and Karolinska Institutet used cryo-EM to determine the structure of the full SARS-CoV-2 spike bound to sybody 23. The RBDs switch between two positions: in the ‘up’ position the RBDs poke out, ready to bind ACE2; in the ‘down’ position they are furled to hide from the human immune system. The molecular structures revealed that sybody 23 binds RBDs in both ‘up’ and ‘down’ positions, and blocks the areas where ACE2 would normally bind. This ability to block RBDs regardless of their position might explain why sybody 23 is so effective.

Finally, to test if sybody 23 can neutralise a virus, the group of Ben Murrell at Karolinska Institutet used a different virus, called a lentivirus, modified such that it carried SARS-CoV-2’s spike protein on its surface. They observed that sybody 23 successfully disabled the modified virus in vitro. Additional tests will be necessary to confirm whether this sybody could stop SARS-CoV-2 infection in the human body.

“The collaborative spirit has been enormous in these times, and everybody was motivated to contribute,” says Christian Löw, one of the lead scientists in the study. The researchers started the project as soon as they received approval from EMBL leadership to reopen their laboratories during the COVID-19 lockdown. They managed to select the candidate sybodies and perform the analyses in just a few weeks.

“Getting the results so quickly was only possible because the methodologies we used had already been established for other research projects unrelated to SARS-CoV-2. Developing these tools would have taken significantly more time and resources,” says Löw.

The results of this project hold out the promise of a potential way to treat COVID-19. In future work, the scientists will perform further analyses to confirm whether sybody 23 could be an effective COVID-19 treatment.