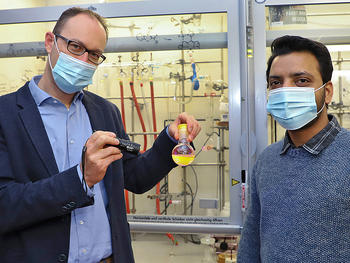 Many people know the effect from discos when “black light” makes clothes or writing boards glow. The reason for this are so-called fluorescent dyes. They send back part of the light they are exposed to in a slightly different way and thus glow. Particularly large fluorescent molecules are often interesting for research and industrial applications. Scientists from the Institute of Organic Chemistry at Technische Universität Braunschweig have succeeded in producing complex fluorophores and dyes in the near infrared range – in three simple steps.

In order to be able to absorb and re-emit light, electrons are excited or charges are transported in the fluorescent dye molecules. In most cases, the larger the molecules, the easier it is to transport charges. But building large molecules is often not easy and usually involves many steps.

This is where the scientists from the Institute of Organic Chemistry came in. They have developed a method with which they can construct complex fluorescent molecules in a relatively simple way. They do this by joining individual components in two steps (oligomerisation). In a further step, they simultaneously remove a large number of hydrogen atoms. In this way a large molecule, for example an octamer, is formed from eight individual molecules.

The chemists’ results may be of interest for different areas where (fluorescent) dyes are used, for example in batteries, solar cells or screens. Postdoc Dr. Atanu Patra says: “The most interesting thing about our work is its simplicity. We have synthesised these complex molecules using simple methods”. The scientist has been researching in Professor Werz’s group since April 2019 and is funded for two years by a postdoctoral fellowship from the Alexander von Humboldt Foundation. Professor Daniel B. Werz, Professor at the Institute of Organic Chemistry: “What we do is basic research. But our results can be interesting for a wide variety of applications, especially because our method is based on three simple steps. For me, good chemistry doesn’t have to be complicated, but rather impresses through simplicity. Complexity through simplicity, so to speak, is the best thing you can do”.