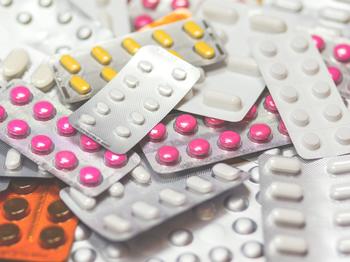 According to scientific estimations, humans are exposed to 10,000 to 100,000 environmental and exogenous compounds in an individual lifetime. Various molecules as well as co-exposures can impact drug efficacy (symbolic image).

Humans are exposed to various environmental or dietary molecules that can attenuate or even increase the effect of therapeutic drugs. Studies on the industrial chemical bisphenol A and the phytoestrogen genistein, for example, have shown drug-exposome interactions. However, interactions between exposures and therapeutic agents have not been systematically investigated to date, conclude chemists Benedikt Warth and Manuel Pristner at the University of Vienna in a review article published in "Trends in Pharmacological Sciences". Recent advances in mass spectrometry are highly beneficial to the concept of systematic analysis, with high potential to elevate precision medicine to an unprecedented level.

According to scientific estimations, humans are exposed to at least 10,000 to 100,000 environmental and exogenous compounds in an individual lifetime, which are mainly absorbed through our dietary. "Our body can effectively detoxify most of these substances, but various molecules as well as co-exposures can impact drug efficacy," says Benedikt Warth, deputy head of the Department of Food Chemistry and Toxicology at the Faculty of Chemistry and coordinator of the newly founded national exposome research infrastructure, EIRENE Austria.

Think of the well-known instruction not to drink alcohol in combination with antibiotics or pain relievers. "Ethanol is a well-studied toxin that can alter the effect of the active agent," says Warth. Bisphenol A (BPA) is another popular environmental toxin that practically everybody has accumulated in his or her body, although mostly in very low concentrations not considered to be critical for human health. BPA, a crucial component in the plastics production, has shown to interact with various anti-cancer therapeutics, which can result in drug resistance and reduced effectiveness.

Genistein, a phytoestrogen derived from soybeans and a prominent active agent in hormone drugs for menopausal symptoms, can also affect various drugs, in particular hormone-relevant chemotherapeutics against breast cancer, the researchers explain in their article. These interactions can have negative as well as positive effects.

"Among the tens of thousands to hundreds of thousands of molecules that humans are exposed to, countless could interact with therapeutics, especially under certain conditions or in critical phases of life such as pregnancy or adolescence", PhD student Manuel Pristner explains.

"Today's high-resolution mass spectrometry enables us to measure a very large number of molecules in parallel. This way, we can systematically investigate the network of relationships between the so-called exposome, i.e. all measurable exposures, and certain active agents,” says Warth. Furthermore, improved bio-informatic algorithms enable the researchers to analyse the generated big data sets.

To date, researchers have been specifically looking for the effect of a certain molecule on a specific receptor. "With the new technologies at hand, we can expand the approach and not only use a fishing rod, but a fishing net to implement a comprehensive screening strategy, which might lead to discoveries that we would not have been able to make based on rational hypothesis," say the chemists.

There are different reasons why certain active agents work well in one person and less or not at all in another, depending on an individual genome, the presence of certain receptors, the activity of enzymes or simply chemical reactivity.

An improved understanding of exposome-drug interactions could enable physicians to prescribe drugs and drug doses on an individual basis, increasing their effectiveness and minimising or even avoiding side effects. Individualised medication for a patient through a standardised pre-screening of his or her exposome "are still future dreams," according to Warth, "but the systematic approach could be ground-breaking and also benefit the early stages of drug development."